Can You Hear Me Now? Developing Character Voice 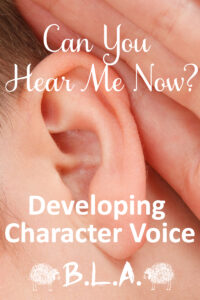 If you've been striving to write professionally any amount of time, you've likely encountered the term writing 'voice.'

What is it? Can we buy some off Amazon?

There's what's called 'author voice' but there's also what we refer to as 'character voice.'

For instance, when it comes to author voice, one could reasonably pick up two novels and easily discern which one Stephen King wrote and which one J.K. Rowling wrote.

How? The authors leave a sort of stylistic fingerprint.

A similar effect also can happen with characters when authors do the hard work and craft them well.

If we craft a truly dimensional character, the reader should be able to read a bit of dialogue or a snippet of narrative and automatically KNOW which character has the stage.

This is accomplished by crafting a full-bodied, fully formed, masterfully developed VOICE.

What IS character voice and why is it important? That's what this class will cover.

• What's the relationship between setting and character voice? How do we make the most of that?

• How do we deal with accent and dialect in a way that enhances the fictive dream?

• What's the relation between action beats and character voice?

• What are some expert techniques for expressing character voice?