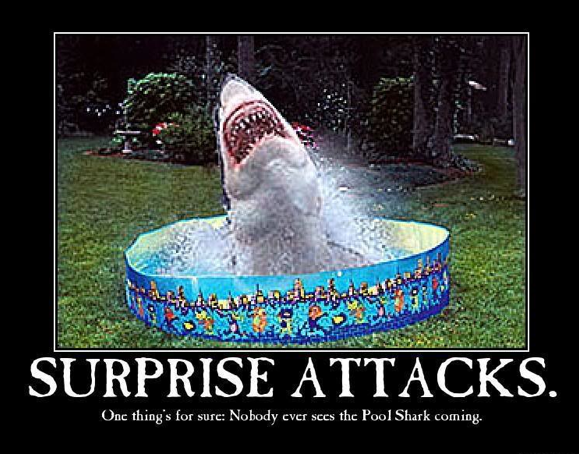 When even ur Kiddy Pool is not safe…

For anyone in the Denver, CO area, I will be presenting this Saturday (register here). I am STOKED, not only because I get to teach writers, but it’s like a little slice of vaca-childhood. Ah, summer vacation. The Spawn is about to be let out for three months toddler bliss.

I miss it summer vacation. I remember how the last three weeks leading up to school getting out were sheer torture. The poor teachers probably felt like prison guards trying to keep the inmates calm…only they didn’t have stun guns and a high-pressure hose (those were for the inner city elementary schools :D).

Though, now that I think about it, slap a sprinkler on the end of that high-pressure hose and we would have likely loved that.

Did you guys end your year with Field Day? Sorry. I hated Field Day. I think Field Day was invented by the same sadists who thought up Dodge Ball. Every year I spent my last two days of school getting my butt kicked in every sport imaginable. Good thing I was too focused on summer vacation to care. All I had left to do is clean out the 900 pounds of crap I had somehow fit into my desk and locker.

Oh, there’s that protractor thingie that was on the school supply list. What DOES that thing do, anyway?

That final bell would ring and it was over. I would spend the next two and a half months loaded with sugar and wrinkled from water. My grandparents had a swimming pool and when we weren’t there, we were wearing a hole in my parent’s lawn with a Slip and Slide. Remember those things? Good thing I grew up in the days before everyone went lawsuit happy.

Really? You dove head-first off the station wagon onto a piece of plastic and sprained both your wrists??? Well, guess you won’t do that again, will ya? Stop crying before I give you something to cry about. 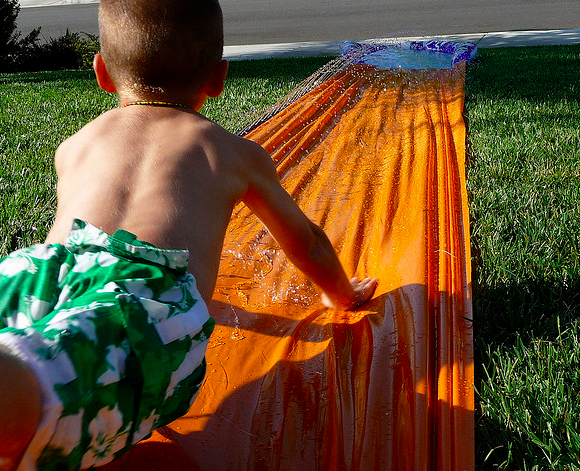 Yeah, NOTHING was childproof. All the playground equipment was heavy-duty industrial steel, and you couldn’t play on it unless your tetanus shot was up to date. And back then little girls actually wore dresses, so the first sucker kid down the slide usually suffered second degree burns down the backs of her thighs.

So we would put the water hose on the slide and make our own water park. Between that, the dancing in the sprinkler and the Slip and Slide, I have no idea how my parents didn’t have a $600 water bill. Maybe they did, but it was well worth the money to keep the screaming hoard of wild Indians locked beyond the sliding glass door….which, by the way, was actually LOCKED. When cartoons were over at 8:30?

Out the door we went.

Need water? Go lap some off the Slip and Slide. See, like the dog. Just drink upstream from him. Go! Before I put you to work cleaning bathrooms.

The neighbors want to take you to Jewish Camp? Okay, but this time, don’t convert. You cannot have a Bat-mitsvah, and you’re going to Baptist Camp next week. The Lutherans have dibs on you after that.

My brother and I had the COOLEST gym set out back. Nowadays it would be considered an Al Qaeda training facility. It was 20 feet tall, had uneven bars, parallel bars, climbing bars, a rope to climb, and iron rings. It was the glorious centerpiece of the neighborhood. ALL the kids wanted to be at my house playing Red Dawn, also known as Kill the Russians.

Oh, we were politically incorrect back then, too.

Those Russians were always taking Cabbage Patch Kids hostage. We knew they had a plan to brainwash them then reinsert them as Cabbage Patch Sleeper Cells that would kill us in our sleep…

…IF we ever slept. No we stayed up ALL NIGHT LONG. It was SUMMER!

Okay, yeah. We only stayed up that late when we went to my cousin’s house. They were…teenagers. We did all kinds of things we weren’t supposed to. We put on makeup, watched MTV (back when it actually had music) and watched scary movies and played Bloody Mary.

Eh, she never did show, but that didn’t stop us from nagging her every Friday night.

My cousins are responsible for my current aquaphobia. If it ain’t chlorinated, I ain’t swimming in it. Jaws ruined me for salt water and Friday the 13th pretty much ruined fresh water. But it was okay, they had a pool too….and a DIVING BOARD.

Are those things even still legal to have now? We would spend all day long inventing new dives.

Oh, yeah, well I will raise your Cannon Ball a Bazooka Loaded with Banned Nuclear Warheads. TOP THAT, SUCKAH!

The first eight weeks of summer were magic. We’d swim and jump for HOURS on a trampoline and go to Six Flags and stay up late so we could walk to that small wooden  shack that served as a snow cone stand for five months out of the year. We’d play in the streets until the street lamps flickered on and beckoned us home. Then we’d beg our parents to let us at least play in the front yard so we could catch frogs and fireflies. 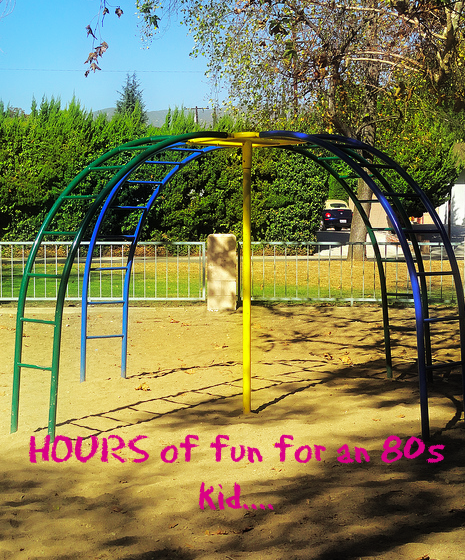 Ah, but then eleven weeks would be over, and we’d have the Twelfth Week Itch. In Texas it is so hot by August that everything, including us kids, start to wilt. We were rested and ready for a new school year. Our parents started having to play warden and make us go to bed by nine so we could get our body clocks reset for school.

As adults, what would we give to have three months to just play? Maybe that’s the secret to world peace. Maybe all of us are just stressed out and we need to have time to scream and yell and ride bikes up a ramp made out of a door someone threw away.

Maybe if the U.N. would just get all the world leaders together for the LONGEST SLIP AND SLIDE EVER!!!!! (Just tape all of Dad’s lawn bags to the end until you run out of space on the White House lawn). Maybe if everyone got a chance to play together and run off all the excess energy, maybe then we’d be too tired and happy to be stressed.

I miss summer vacation. How about you? What do you remember? What summer rituals did you have? Do you think our society would be better off if everyone was required to take summer vacation? Maybe we could alternate seasons so everyone would have time off. If you had THREE MONTHS OFF, what would you do? Where would you go? Would you learn to sing? Take up African dancing? Hop on a Slip and Slide?