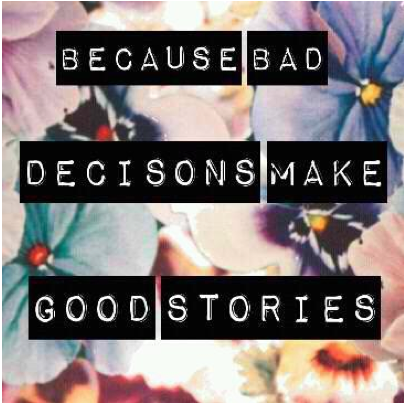 Bad decisions make GREAT fiction. I know it’s tough to not write about fully evolved/self-actualized characters, but those guys are B-O-R-I-N-G. We like to watch people grow, probably so we might glean some hint of how to grow, ourselves. The more messed up a character is? The more INTERESTING they become.

Come on! You know it.

If you were at a restaurant and had a choice of where to eavesdrop, would it be the couple talking about their plans for the week as a team baking cookies for the school? Or would it be the nasty breakup on Table 6?

If we don’t have conflict, the story falls flat. Everything comes too easily and that is a formula for a Snooze-Fest. I am SO HUMBLED and honored to be friends with THE LEGEND Les Edgerton. In his mind? NOTHING comes easily. Even if your protagonist just wants directions, she should get, “What? Do I look like Google Maps?” in response.

Once you get an idea of what your protagonist’s end goal is, you need to crush his dream of ever reaching it (well, until the end, of course). Remember, last week we talked about the Big Boss Troublemaker and log-lines. Generally (in genre novels especially), it is the BBT is who’s agenda will drive the protagonist’s actions until almost the end.

The CORE ANTAGONIST (what I call the BBT) is responsible for creating the problem that 1) disrupts the protagonist’s life 2) forces change and growth 3) is in need of clear resolution by the end. No core problem and there is no clean way to end the book.

Your protagonist will be reacting for most of the novel. It is generally after the darkest moment that the protagonist rallies courage, allies, hidden strength and suddenly will be proactive. THIS is the point when the protagonist has CHANGED enough to become a HERO.

Logical disasters are birthed from good plotting (and a solid core problem). One of the reasons I am a huge fan of doing some plotting ahead of time is that it will be far easier for you to come up with set-backs and disasters that make sense.

There is a scene from the Mel Brooks film Blazing Saddles that I just LOVE. The prime villain, Hedley Lamarr, is interviewing scoundrels to go attack a town he wants to destroy so that he can build the railroad through it. There are all kinds of bad guys standing in line to give their CV.

This sequence used to be quoted quite a lot in my workshop. Why? Because there are many new writers who, upon noticing doldrums in their novel, will insert a rape scene.

I am not making this up O_o.

And if I hadn’t seen it so many times in my career, I wouldn’t have brought it up. We can chuckle, but this is fairly common to the new writer, just as it is common for children to write the letter “c” backwards. It is a heavy-handed attempt by a new writer who hasn’t yet developed plotting skills to raise the stakes and tension. Robberies, car chases and rapes are justifiable conflict, if they genuinely relate to the story. Otherwise, it’s contrived and awkward.

The Many Faces of the Antagonist

There is ONE BBT. Sauron, Buffalo Bill, VIKI, Loki, Darla the Fish-Killer all create the core story problems the protagonists must resolve. Ah, but along the way, there should be conflict in EVERY scene. Conflict often will come from multiple directions. There will be the long-range conflict (I.e. drop evil ring into volcano in Mordor) and short-range conflict, which is very often generated by allies (run from angry pitch-fork-wielding-farmer because Merry and Pippin stole veggies).

The antagonist role can shift. It can be friends, family, coworkers, but these guys are not the CORE antagonist.

For instance, in I, Robot, VIKI (the computer controlling all the robots) is the Big Boss Troublemaker. Yet, who generates much of the conflict? ALLIES who are acting as antagonists.

Whether it’s the protagonist’s grandmother, “Look, I won an evil robot in the lottery! See how well he handles a KNIFE? We’ve been cooking ALL DAY! Whee!” or his boss “What robots tried to kill you? The tunnel was clean and you’re imagining things. Gimme your badge,” poor Spooner CANNOT get a break.

The more the robots try to kill him, the more his allies protest and create roadblocks, generating conflict.

Even in literary works, there has to be external conflict. A book of navel-gazing is not literary. It’s navel-gazing. In the Pulitzer-Winning book and later Oscar-Winning movie The Hours each story is a manifestation of Virginia Woolf’s classic novel Mrs. Dalloway. And, if you watch the movie or read the book, it’s WAY better if you’ve actually read Mrs. Dalloway.

From the Oscar Award Winning Film, “The Hours”

Clarissa wants to help her former lover-friend who is ravaged by AIDS, but he refuses help and torments her by calling her Mrs. Dalloway (who was a woman searching for meaning). Mrs. Dalloway arranges the flowers and flitters around planning parties, but deep down believes she’s a non-entity.

Clarissa is the same. She has become what she fears and those around her only reinforce this insecurity. Clarissa can’t connect to her lover, her friend or her daughter and there are roadblocks at every turn.

One way we can ensure we have conflict is to use the Blake Snyder method. In each scene, ask “Protagonist wants X, but then….” Someone or something should stand in the way, and it is better if it’s someone. Remember all good characters have baggage and issues like real people. This is what will make your cast more than talking heads. I know it is counterintuitive, but this is why writing is HARD. Humans avoid conflict, but great writers dive straight for it.

What are your thoughts? Questions? What books or movies ratcheted the tension so high you thought your nerves might just snap?