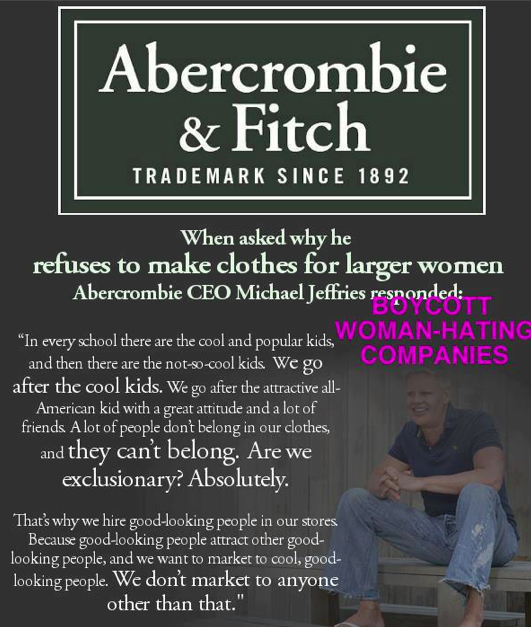 I wasn’t going to blog at all this week. Have been taking a break and refueling. But when I came in from being away for a week, one of the first articles I saw was regarding Abercrombie & Fitch CEO Michael Jeffries’ “marketing campaign” for the preppy clothing line (quoted in the meme above).

Jeffries is being hailed by some marketing experts as a brilliant visionary, but I wonder how he would be perceived if he was excluding people of color or sexual orientation. What would people think if he only wanted “white kids” or “straight people” wearing his clothing line?

Don’t get me wrong, A&F has the right to define their demographic, but we as consumers have a right not to buy clothes from such an uncreative designer that has such a warped vision of beauty and a skewed sense that Skinny=Popular & Cool. Even Perez Hilton weighed in on this matter.

A&F’s marketing campaign is as deep as a puddle, so as a former copy writer, I thought that maybe I could offer some assistance:

We at Abercrombie & Fitch are seriously uncreative fashion designers. It takes true talent to make larger people look equally amazing, and we simply lack that skill and prefer to take the easy route. Hey, it doesn’t take a lot of imagination to make a Size 00 woman look attractive, but to design clothes that make a size 14 woman look just as hot? Wow. We’d totally have to go back to school for that, and then we wouldn’t have time to spray our cologne all over the mall like a crop-duster.

I know this might seem strange, but I don’t think I am all that offended that they don’t carry larger sizes. A lot of stores don’t. But these other stores are at least smart enough not to use Mean Girls Marketing.

The Real Problem with Abercrombie and Fitch

What is troubling about A&F’s stance is that body size is somehow equivalent with beauty, a great attitude and popularity. If you are over a size 10, then clearly you can’t possess any of these qualities. Conversely, if you are so thin you disappear when you turn sideways, then you must be AWESOME and have it all together.

I think Jeffries’ stance hurts all kids on all ends of the size spectrum.

I was never a cool kid *shock face*. I know!

I was the geek who none of the A&F crowd noticed until they needed help with their Chemistry or Physics homework. High school was very hard for me. I owned three pairs of pants and four shirts and it didn’t take long for the A&F crowd to hone in on this. Many of them made it their life mission to point out I wasn’t like them and that I was not much better than gum on the bottom of their Cole Haan shoes.

It wasn’t until years later that I realized their behavior stemmed from a profound brokenness. If they didn’t have the trendy clothes, if they were so FAT they had to wear a SIZE SIX, they had no identity. They had to purchase it. The labels promised what they had no power to deliver…meaning. Authentic identity.

While kids like me were having fun making our own bad Kung Fu movies and holding all-night Monty Python marathons with fellow members of the Chess Team, those “cool” kids were puking in the shower, drinking themselves into a stupor, or snorting cocaine so they wouldn’t get too fat for their designer clothes.

Yes, There is the Obvious

I know a lot of us are offended by Jeffries’ attitude toward those of us with a fair share of fluff. That’s easy to be angry about. We know this country is facing an obesity epidemic and we do have to get that under control.

Being too overweight creates all kinds of health problems, but there are plenty of amazing, beautiful, intelligent, kind, wonderful people who can’t fit into A&F clothes.

Yet, I don’t think this is the most insidious part of the A&F message.

For years, I was naive (like Jeffries). In high school and college, I wanted so much to be like those “cool” kids. Yet, years later, I was astonished how many of the “popular kids” were dead. Some were homeless because of hopeless drug addiction. Others were in and out of rehab and mental facilities.

So many of the kids I assumed to be the “All-American kid with a great attitude and lots of friends” committed suicide because death was the only way they could see to end their inner suffering so cleverly disguised by distressed denim.

Why did these kids choose to end their own life?

No designer label could give them what they so desperately needed—love, meaning, and genuine connection.

I was guilty. I’d bought into the marketing lie—that these kids with these clothes have everything. Now, being older and wiser, I am deeply saddened. What if I’d had the courage to cross the A&F line and realize that “cool guy” was hurting? Would he still be alive?

His Name was Matt

I cry every time I think of him (crying now as I write this). I had such a crush on him, but I didn’t have the right (clothes) to talk to him. I didn’t have enough money to be his friend, or the right “look” to be his girlfriend.

And Matt committed suicide and I’m angry. I will never be able to tell Matt how awesome I really thought he was. I couldn’t see beyond his clothes to notice his drinking and drug problem. I was blinded by the glare of his designer label, the glare that hid the growing darkness that was consuming him. I took his A&F clothes at face value. They became a barrier I couldn’t cross.

Hey, he’s wearing Abercrombie and Fitch, so everything in HIS world is FABULOUS.

Her Name was Adrian

She was a cheerleader, and I was afraid to talk to her. She died because she drank so much alcohol, she asphyxiated in her sleep. She drank to numb the pain hiding behind her trendy clothes; pain none of us saw.

This Crisis Runs Far Deeper than a Box of Krispy Kremes

I believe we are a country in crisis, not only because we struggle with our weight. We are in crisis because we are too easily drawn into the lie. Thin and beautiful people hurt, struggle and are lonely, too. An $80 t-shirt can’t fill the void. Just go to author and former fashion model August McLaughlin’s blog and she talks about this very issue.

To all of my Fellow Fluffies…

Y’all are awesome and Jeffries is an @$$clown. You are beautiful and every one of you have something special to offer this world. Ignore idiots. Don’t buy the lie that you aren’t special because you can’t wear their clothes.

BUT, don’t buy the lie that those who sport the A&F line are okay. Some of them are profoundly wounded. The designer label could be their way to hide the hurting and broken person below.

To all of the Beautiful People

Yes, we love looking at pictures of you. Being beautiful and thin on the outside is a gift and one you can be proud of. I hope you will be as saddened by Jeffries’ stance as I am. You are more than your Size 2 jeans.

Many of you are artistic, creative, intelligent, kind and good and that should matter. You are awesome on your own without A&F’s help. For Jeffries to assume his clothes make you YOU should just be insulting.

Dare to Cross the A&F Line

I end with this this letter to Abercrombie & Fitch, which says it all. I know that the good life, the rich life is discovered when we look for beauty everywhere. The world is filled with it, and often it isn’t wearing a pair of overpriced capris. I challenge each and every one of us to be brave enough to cross that A&F line—either defect from it, or reach out in spite of it.

What are your thoughts? Were you as upset and saddened by Jeffries’ message as I was? To the popular crowd, are you insulted that Jeffries assumes his clothes is what makes you worthwhile?

Were you the geek who struggled to fit in? What are your thoughts about this growing narcissism we’re seeing? The rise of body dysmorphia? What do you think is dangerous about this consumer culture? To the parents out there, what does this make you feel in regards to your children?

Or, am I out of line? Am I reading too much into this. Hey, I AM a writer. We over-think almost EVERYTHING :D. Feel free to disagree, I just ask you do it respectfully.

And yes, comments count for my contest, but I am not mentioning my books here because this issue is not to market me, but rather to talk about a growing problem we all need to address.

We are not alone.