Are You Alienating Fans on Facebook & Fracturing Your Platform?

Ebola, Swine Flu and The Kardashians—Why is a Zombie Apocalypse So Intriguing? 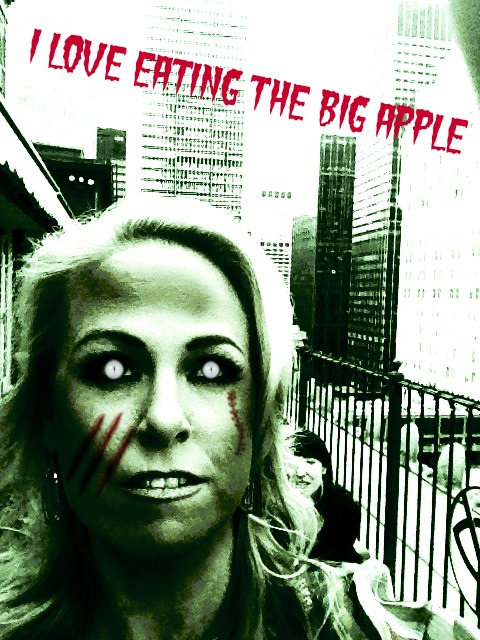 Braaaaiiiiinssss….with some salsa, please. And a refill on my merlot?

Just made it in from a whirlwind week in NYC at Thrillerfest. I am so tired I want to DIE, yet my stupid biological clock still has me up at dawn despite how exhausted I am. Of all places, though, NYC seems to be the favorite place for moviemakers to destroy or infect. That and LA. Though I will mention the aliens never land in Texas.

Probably because the movie would be 15 minutes long :D.

One of my close friends, Piper Bayard, wrote a fabulous book, Firelands which deals with a post-apocalyptic world where religious fanatics now rule a world in ruin and use food to control the masses. In the spirit of her book, I wanted to discuss the apocalypse. That and I just spent a week in NYC walking through “mystery puddles”…which makes me wonder….

Why is the zombie apocalypse so fascinating to us?

One of the wonderful parts about being a writer is we are really well educated…too well educated. Any writer worth his or her salt reads…a lot. I recall (back in college) reading The Hot Zone, which is an absolutely terrifying book. Terrifying in its premise, sure. But also terrifying because it is based off real events.

For those who don’t know, Ebola actually made it to the United States in a shipment of infected monkeys back in the early 90s. 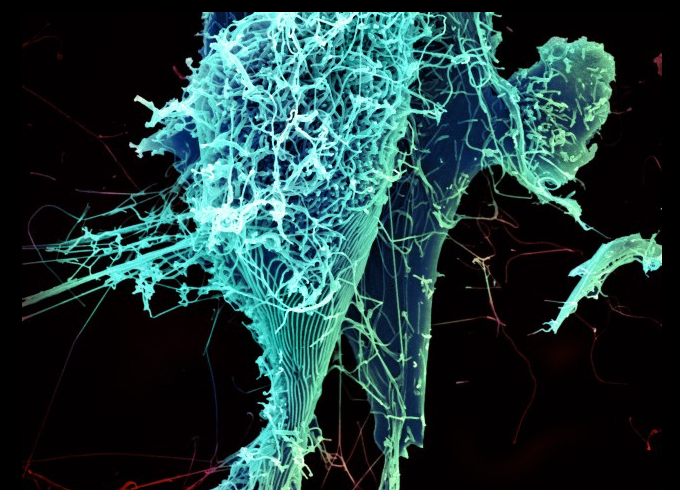 String-like Ebola virus particles are shedding from an infected cell in this electron micrograph. Credit: NIAID

Ebola happens to be one of the most frightening diseases I’ve ever read about. Ebola Zaire, the most virulent of all the strains, essentially liquifies a victim within less than 12 days. The mass destruction it does to the body is the stuff of nightmares.

The virus does a number of nasty deeds to the body, but namely it attacks all the connective tissue from the inside out causing catastrophic internal hemmorhaging. This means the organs (including the brain) essentially turn to pudding because there is nothing left to hold everything together.

As a response, the body throws out all its clotting agents trying to keep the infected person alive…until it runs out of clotting agent and then the person just begins to bleed…from EVERYWHERE. Blood teeming with active virus begins to pour from the nose and mouth and eyes until the victim is rendered a puddle of infected blood, bone and tissue.

This is how the virus spreads—via blood contamination. The victim is literally dead before they die, their face sliding off the bones because nothing is left to maintain/support the facial architecture.

What makes Ebola especially horrific is that it’s only a few peptides and mutations from being something airborne. If something like Ebola spread like the flu? We’re toast. This is what The Hot Zone addresses. A version of Ebola (similar to Zaire in burn rate) really made it to the US…and it spread through the air like a cold.

I won’t say any more because this is a really fabulous book, but part of why it was so scary is IT FREAKING HAPPENED.

Ebola happens all the time in Africa and how do they deal with it? I call it the Three B’s—bleach, bury and burn. When a village has an outbreak, the authorities will cut down trees to block any roads leading to the village…and wait for everyone to die. Ebola Zaire has roughly a 99% kill rate. Almost no one ever survives. Authorities wait for everyone to be dead then torch the place.

The Scary Part About Viruses

Viruses are a lot like politicians and Kardashians. They are parasitic and they will adapt as much as needed to survive. If they burn through a species, they’ll change to be able to burn through another. If contamination via blood isn’t working? A virus is fully capable of changing tactics, like marrying Kanye West and naming it’s kid something seriously stupid like North West.

Sorry, forgot we were discussing Ebola.

As populations get larger in countries like Africa, China and South America (ideal virus petri dishes because of climate and population density) we are invading areas of rain forest no human has ever set foot in. A virus might be inert or less virulent because local wildlife has developed immunity over time, and then? Virus spots the equivalent of a Twinkie on two legs (people). NEW JUNK FOOD!

Viruses have no long-term planning capabilities. They suck at having an IRA or even going to college. They just want to consume no matter the expense to the host, much like deadbeat in-laws. 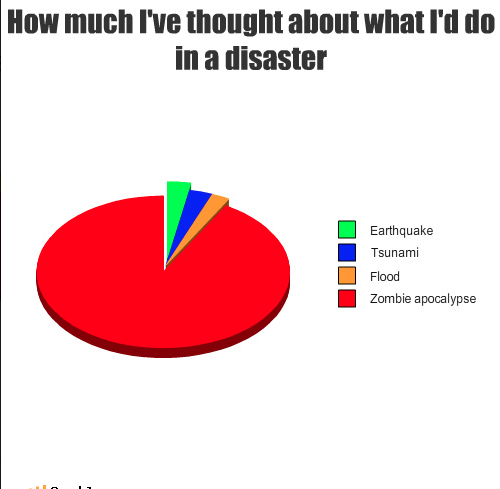 But Isn’t This Why the Zombie Fascination is So Strong?

I love vampires, wizards, werewolves and the like, but zombies hold a unique fascination. Why? Because I think deep in our collective subconscious, we realize this is something that could happen…which is why you need a plan (but that is totally another blog).

I was one of the  first people to get Swine Flu. Hey, I’m an early adopter. What can I say? I contracted Swine Flu a year before we had a pseudo-pandemic. I had 105 fever for almost 12 days, and not only did I want to die? I wanted to die, be cremated, then have someone shoot my ashes it was so bad.

We live in a scary world. Bird Flu, Swine Flu, Ebola, and the Kardashians.

Come on! The Kardashians already have a reality show and have invaded QVC. If they manage to marry and breed faster? We could be looking at a world filled with mindless people wearing too much lip gloss and trashy shoes and being permitted to name their own children *shivers*. If a Kardashian meets up with Ebola? They could spread through sneezes and unwashed hands. Next thing we know, we are filled with botox, unable to move our foreheads or articulate an intelligent thought.

What are your thoughts? Most of us aren’t afraid of a vampire invasion, but zombies? A lot of us still get that niggling, “What if?” Why do you think we do that? Is it because we think it might happen? Is it because we’ve spent too much time watching The Bachelor or Toddlers and Tiaras?

I know you guys are geeks and have thought this through, so I would LOVE to hear your thoughts!