From Margin to Mainstream: Why Erotica Matters 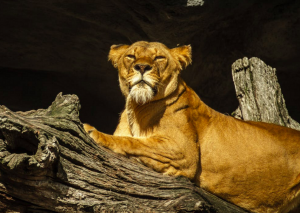 I am a sucker for a strong female character and these gun-wielding, sword-swinging gals are skyrocketing in popularity both in books and film. 2017 has served up both Wonder Woman and Atomic Blonde, two characters who are as different as Amarillo and the moon, and this has given me a lot of food for thought.

Last week I watched the pilot for Midnight, Texas and, like most shows, I’m undecided how I feel about it. It usually takes at least three episodes for me to get a clear picture of whether I want to remain or bail.

I loved True Blood and am a fan of Charlaine Harris. As a Texan and an author who writes stories set in Texas, this series of course piqued my interest.

Overall I enjoyed the pilot, but there was one scene that bugged the dickens out of me and thus prompted me to write a post about creating strong female characters.

More about Midnight later and what hit the sour note.

There’s No Mystery Why the Bad@$$ Female Has Gained Appeal

Being an older gal, I remember a time when every woman in every show twisted an ankle. She huddled in a corner panicking and weeping waiting for a man to save her instead of standing up and being useful instead of just decorative. I also recall being a seriously ticked off five-year-old. 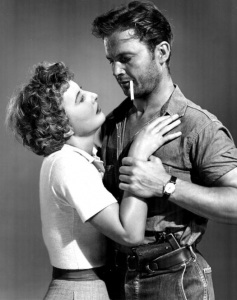 Why was she just sobbing in a pile instead of picking up the gun? Tire iron? Whatever.

As a kid of the 80s our female action heroines were Charlie’s Angels *rolls eyes* but it was a start…even though this magazine cover (below) gives me gun safety apoplexy. 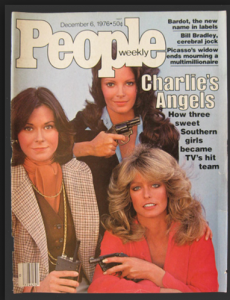 But back in the day it was a fresh idea. Take some pretty women with lots of lipgloss and even more hairspray, hand them guns and —> POWER.

For me, Terminator 2 was a tectonic shift in how women could be viewed in terms of an “action hero” especially since I was the only girl in 1985 taking martial arts instead of ballet. When I initially competed in karate, there were no “girls” divisions so I competed against boys.

With T2, finally there was a female action hero for me!

Yet, it seemed like Hollywood completely missed the point of Sarah Connor. Yes, in T2 she is all buff and devoid of emotion, fixated on a singular objective and willing to use any means to get there.

Kyle Reese gives us the foreshadowing of this in T1.

It can’t be bargained with. It can’t be reasoned with. It doesn’t feel pity, or remorse, or fear! And it absolutely will not stop, ever, until you are dead!

He says these words regarding the Terminator, yet this is eerily prophetic regarding Sarah in T2.

The Sarah Connor of T2 was a METAPHOR, not the singular template for what makes a bad@$$ female action hero. 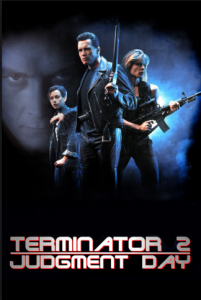 Yet, T2 set the pattern for over two decades of one-dimensional, bitter, unfeeling and often unlikable female action heroes from Lara Croft in Tomb Raider, to Evelyn Salt in Salt, to the female assassin Fox in Wanted and now we get Lorraine Broughton in Atomic Blonde.

Though I haven’t seen Atomic Blonde yet, I’ve watched enough clips and trailers to know she’s basically John Wick with boobs. Which *shrugs* is cool.

To be clear, I watch and enjoy a lot of these movies and I think they have a place. For instance, no one expects James Bond or Ethan Hunt (Mission Impossible) to be dimensional.

We expect these guys to have fast cars, cool gadgets, woo beautiful and often dangerous women, and take out the bad guy in new and creative ways. I’m certain Atomic Blonde will deliver the same, because that’s the movie’s goal. 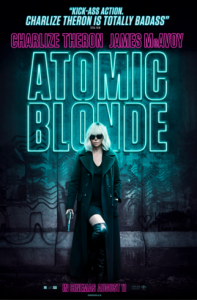 Yet, in my POV, the female action hero who can shoot and fight as well or better than any man has gone from breaking ground (and glass ceilings) and devolved into a die cut trope. In short, this assembly-line character is low-hanging fruit when it comes to storytelling.

I’m sure Atomic Blonde will have all kinds of cool fight scenes and I’m beyond impressed with Charlize Theron and what she did to prepare for the role. Atomic Blonde is groundbreaking for me in that Hollywood cast an over-forty female and not some twenty-something Megan Fox clone.

For that? They get major applause from me.

I know Lorraine Broughton will thrill and electrify me. She will not, however, be my hero which makes me wonder WHY?

Why Wonder Woman is STILL My Hero 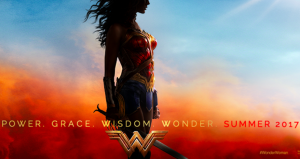 One of the many reasons the newest rendition of Wonder Woman had me in tears through most of the movie is the creators ignored the low-hanging fruit and reached higher…MUCH MUCH higher.

We weren’t handed (yet again) what boiled down essentially to a man with girl parts. We had a fully realized and definitively feminine heroine. Additionally, her femininity didn’t “lessen” her.

The story showed us that a woman wasn’t required to become a man in order to be powerful.

THIS is what I feel is a superlative example of a female action hero. Yes, she is amazing with her fighting skills and ability with weapons etc. but the creators didn’t stop there. What made Diana even more powerful (to me) was she possessed innocence and naivete and was motivated by love and compassion not some bitter backstory.

For me, Wonder Woman demonstrated more power in a singular act of undeserved mercy than every Jolie female bad@$$ combined. Being powerful is more than the ability to be violent.

In fact, authentic power is often the opposite.

Back to Midnight, Texas 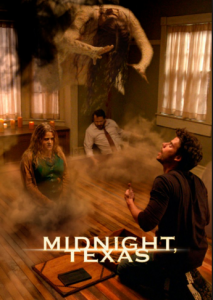 As mentioned earlier, I enjoyed the pilot and look forward to more episodes, but one scene really rubbed me the wrong way and if the show wants me to root for Olivia, they are off to a bad start. There’s a scene where the band of “supers” for lack of a better word, need to detain protagonist Manfred Bernardo to pepper him with questions when he unexpectedly moves to the town.

But Manfred is a psychic with the demeanor and physical prowess of a high school English teacher. Why then did Olivia (resident female bad@$$) find it necessary to sucker punch him in the face with brass knuckles to knock him out/detain him?

First of all, no one bothered, I dunno, asking him to come for a chat. Maybe start there? Over some chips and salsa? Even some salsa dosed with Benadryl? 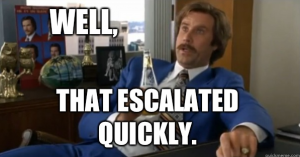 With so many other options, why brass knuckles? Brass knuckles would have crushed his nose and likely cracked orbital sockets and cheekbones. The sheer factual inaccuracy of the results of such a blow irritated me.

Manfred wouldn’t have been simply rendered unconscious, he’d more likely be in surgery to cobble his face back together with wire and bone grafts.

Also, sucker punching a man who’s done nothing wrong (and who’s only been amiable) in the face with brass knuckles was overkill. It was needless and not what truly powerful characters do, especially ones I’m supposed to root for.

Compassion…Strong Enough for a Man AND a Woman

Olivia can show off all she wants with throwing knives and shooting arrows indoors and all of her b*^%iness and brooding doesn’t make her a better character, it makes her a tiresome trope. And authentic bad@$$es don’t ambush unarmed people who’ve done nothing wrong and assault them. 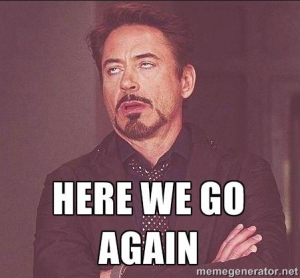 Though so far I like the story concept and other characters, this gal is off to a real bad start with me.

I dislike Olivia for the same reasons I stopped rooting for Arya Stark (though Game of Thrones is chock full of despicable characters). I was on Arya’s side and could ignore a lot of bad things she did (she was a survivor). I was able to overlook a lot of brutality…until she was needlessly cruel, then?

In the end, there will always be audiences eager for the emotionless femme fatale who’s as volatile as she is violent. But, I feel there is great opportunity for writers to dig deeper and reach higher and offer us a wider range of female bad@$$es. If we don’t, then we are like painters who only use black paint, and thus are limiting what we can create.

Wonder Woman has shown us there is a middle-ground between the helpless victim and the pointless brute.

For me? I desire to create strong female bad@$$es characters I wouldn’t mind little girls aspiring to be, and I feel we need more of these women. I would want my daughter to be like Wonder Woman. Evelyn Salt? Atomic Blonde?

Um, yeah. No thanks.

What are your thoughts? Do you have mixed feelings about many of the female bad@$$es? I don’t mind them, but come on! Can we get something different? What do you think makes a female character powerful?

Who are your favorites? Did you cry all through Wonder Woman too? Hollywood portrayed my childhood role model so brilliantly. And I loved that all the Amazons were different ages, shapes, sizes, races and that’s another post. But WOW!

I love hearing from you! And I am not above bribery to hear your thoughts 😀 .

****And MAKE SURE to check out the NEW CLASSES classes below (including writing layered characters and strong females) and sign up!

Summer school! YAY! We’ve added in classes on erotica/high heat romance, fantasy, how to write strong female characters and MORE! Classes with me, with USA Today Best-Selling Author Cait Reynolds and award-winning author and journalist Lisa-Hall Wilson. So click on a tile and sign up!