Great Fiction Goes for the GUTS

Yesterday our nation reeled from a senseless attack on innocent people. I know here at home, we were desperately reaching out for answers. My husband had family in Boston and I had friends who were participating in the race. We were scrambling to make sure our loved ones were okay (all is fine, btw).  We mourn as a nation, as humans. We are grateful for the brave people who ran toward danger to render aid to the suffering.

There were nurses, doctors and other medical professionals participating in the marathon. Despite the fact they were at the end of running over twenty-six miles, they still dove in to assist those injured in spite of their own exhaustion and pain. Carlos Arredondo, who lost his son in Iraq, bravely jumped a security fence into a pile of fallen bodies and immediately rendered aid.

I am awed, humbled and amazed by the many stories of everyday heroes. 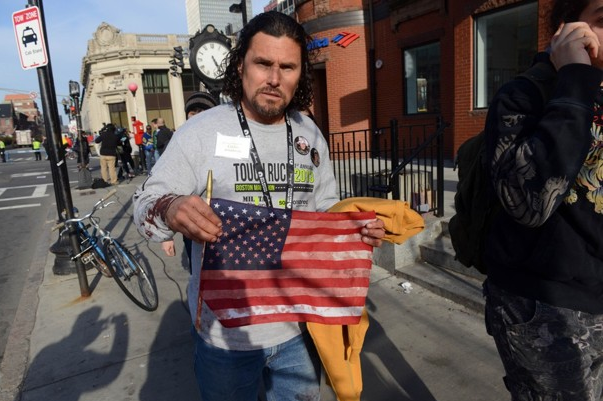 Yet, in the midst of all this chaos, one story in particular caught my attention because, oddly enough, it made headlines along with all other reports piling in from the blast site. My husband and I were searching for breaking news to see if any of our loved ones might be among the victims when I saw this:

I’m not a political analyst and I’m not law enforcement, but I do teach social media. This headline caught my attention because it brought up a new angle I’d not previously contemplated, a new dark side to social media for us all to be wary of. I hesitantly bring this up today, but only because I believe this story is such a powerful cautionary tale for all of us who use social media. We must be responsible and authentic.

A World of Instant

We live in a world of instant communication and connection, and social media is a double-edged sword. Last year, social media saved lives and helped keep my family safe during a sudden outbreak of 22 tornadoes in one day.  Since our power was out, all we could hear were sirens but we couldn’t tell if they were warning our area, or somewhere nearby. I rushed out front to listen closer, and that’s when I heard that unforgettable freight train sound and watched an F-2 lower out of the blackness.

With no power, we had no way of knowing what might be headed our way….and the tornadoes kept coming and coming, one after another. Twitter is what kept us informed. We huddled in the bathroom and used my cell phone to watch Twitter.

Once the power returned, I got back on Twitter to return the favor. One woman who follows me had taken a moment to peek at her Twitter feed at work. I’d just tweeted that yet another tornado was on the ground in Dallas and headed straight for them.

Later, I found out the woman worked in a virtually windowless building and they had no way of knowing DFW was experiencing a tornado outbreak of historic proportions. Had I (and others) not tweeted the warning, the woman and her coworkers wouldn’t have known to seek shelter mere minutes before they were hit.

I bring this up to show that social media is amazing, wonderful and powerful, but we have to be careful how we use it. I’ve talked at length about how I am adamantly opposed to automation, particularly automation that is meant to “appear” as if there is a real person present.

The World Can Turn on a Dime

News breaks in an instant. These days, when disaster strikes, the public knows within minutes, often before anyone even knows what’s really transpired. Social media is used to relay instant news, connect family to loved ones, warn of further danger, etc.

When we preprogram “chatty self-promo” messages, most of the time, people won’t notice, especially if the person injects real tweets in between. Yet, the world can go so dark so quickly, that chatty self-promo automation can become an instant nightmare. Kim Kardashian tweeted her condolences to the victims of the Boston tragedy, but then a little over 20 minutes later tweeted:

Fans were livid and went on the attack. According to the article (linked above) via Hollywood Life’s Emily Longoretta:

One tweet read: “America is in the midst of a tragedy right now. F— you.”

Another similarly responded: “WE DNT GIVE A F— RIGHT NOW KIM.”

“Dolls! Don’t miss me tonight at 8pm ET on @QVC! I’m debuting my gorg new scoopneck tunic on PM Style!! Join me!” Kris wrote on her Twitter, receiving a backlash just like Kim. However, then she removed it.

To me, it is clear that some intern probably just got fired. The Kardashians have a legion of media people to clean up the PR nightmare, yet this highlights a point I’ve been trying to make for some time now.

People are on social media to be social. Ads, promotion and automation from people are resented in general, but they can spark a wildfire of backlash if automation meets with poor timing as it did in the case of the Kardashian family.

I don’t think most of us believed the Kardashians were actually tweeting those promos. I feel the Kardashian fans, for the most part, just accept that promotion goes along with “keeping up with the Kardashians.” But when that automation met the perfect storm of tragedy? It was ugly.

Not Everyone Understands the Ins and Outs of Twitter

One thing we are wise to consider is that a lot of regular people use Twitter, but many don’t understand it the way those of us building a platform do. Many people don’t realize it’s possible to automate, so when they see in ill-timed tweet in the middle of disaster, they react as violently as they would toward someone trying to sell vitamins at a funeral.

We Take a Risk

Humans remember the negative far longer than the positive. If we automate, we are gambling that we can run to Hoot Suite and shut down the chatty auto-tweets before we “tweet” something that makes us look like insensitive jerks. It’s a big gamble with high stakes. What takes years to build can only take seconds to destroy.

Boston, We Love You

I am grateful for Twitter. It kept us and others safe last year in the tornado outbreak. It’s allowed me to reach out to friends in Boston and be there for them, to make sure they’re all right. I think social media is a blessing, but only when we use it with love, wisdom and prudence.

Our hearts and prayers go out to Boston. We love you, support you, we mourn for you and we are here for you.