FINISH THAT NOVEL—Tips to Help You Go the Distance 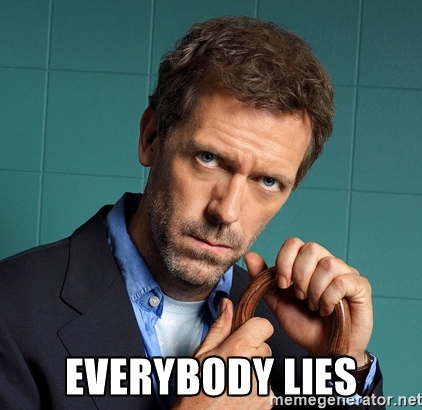 Many emerging writers come to me when they find they are struggling with their WIP. I always begin with the same question, “What is your story about?” Often, I get this response, “Well, my story isn’t plot-driven. It is a character-driven story.”

I have no plot…and please stop asking me because it makes me want to drink heavily.

There really is no such thing as a purely character-driven story. Character and plot are like two keyed cogs. One drives the other. The plot pushes the protagonist to grow and as the character grows, this in turn drives the plot.

For instance, in The Lord of the Rings the plot problem (Toss evil ring in a volcano before power-hungry necromancer takes over Middle Earth) is what forces the Hobbits to leave The Shire. Ah, but once they leave, how they respond to escalating threats determines plot.

For instance, they are barely out of The Shire when Merry and Pippin nearly get them all captured/killed by The Black Rider because they are running from an angry pitchfork-wielding farmer.

That is an ok place to begin, but what if they all remained the same reckless naive Hobbits they were in that scene? Their decisions would impact the story and they would fail.

To succeed, they must grow.

Granted, though we do have two cogs, depending on genre, this will impact the SIZE of each cog. In a Jack Reacher thriller? The plot cog is larger (but the character cog is still there). Similarly, in a literary fiction, this will reverse. In Cormac McCarty’s The Road there is still a plot objective (Make it to the ocean) but the character cog is larger because reaching the goal is far less important than HOW they reach the goal. If Man and Boy stop to snack on people? They fail. The torch of humanity is extinguished. 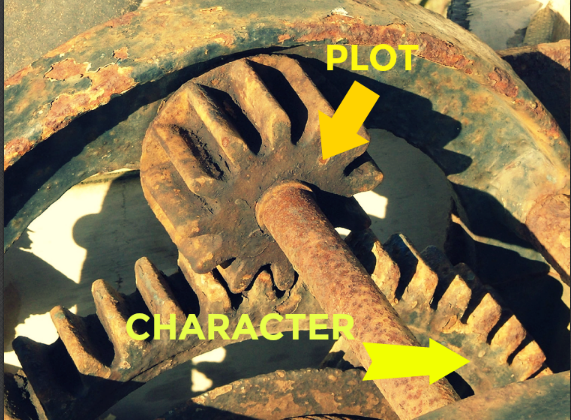 For genre fiction, it would reverse and, depending on the story and the style, the relative size of the cogs will change accordingly. Yet there will always be two cogs.

Regardless of genre, once we have an idea of what our story is about and have set the stage for the dramatic events that will unfold, we must remember that fiction is about PROBLEMS. Plain and simple. Furthermore, it is about PEOPLE who have problems. But not simply ANY problems. Very specific problems, which we will talk about in a sec 😉 .

If we’re missing emotional connection between the audience and our characters, our story loses critical wattage. What are some ways we can help form that connection? Today…

Real humans have wounds that drive our wants, needs, perceptions, and reactions and so should all our characters (even the Big Boss Troublemaker-Antagonist). Maybe your character is a control-freak. Perhaps he avoids. Maybe she is battling an addiction or is a loner or is a people-pleaser. Maybe he is a user or a manipulator.

My question is WHY?

Yes, genetics will have a role in forging our personality, but genes do not a good story make. Having a character be a certain way simply because we need them to be or act that way will work, but so will a heart with damaged valves.

Wounds drive how we perceive our world, what we believe we want, and how we will (or won’t) interact with others. This is critical for generating story tension and character arc.

I used the meme of Dr. House and his motto, Everybody lies. Yet, part of why that character was so successful is that we know something happened somewhere in the past that gave House that core belief.

This belief is what made him a superlative doctor, but it also hobbled every single relationship he ever had. We wonder about the wound because in every episode?

We see that wound in action.

Wounds are the NOTCH That Engages the GEAR

Back to my gear metaphor, but let’s expand it a bit. Think of plot like gears on a bicycle. So long as the gears are engaged and moving forward we have story momentum. Character is like the chain winding around those gears.

Some of you might be old enough to remember riding a ten-speed with the old shifters. You had to practice shifting gears to get the chain to engage a larger or smaller gear and if you didn’t get it right? The pedals spun and the bike just made weird noises. That’s because the chain has to be able to meet with the teeth of the gear via a space or a hole…or it won’t work.

Character functions similarly. We can have the gears (plot) and the chain (character) but if there is no notch (wound) that allows them to ever mesh and create tension? The story has no momentum and just makes weird sounds while we fruitlessly spin literary pedals.

Wounds are the sweet spot, that hole, that allows plot and character to merge into dramatic momentum.

Some writers start with characters and others start with plot. It doesn’t matter so long as you let either be forged with “the wound” in mind. If you have a mental snippet of a rebellious renegade bad@$$ heroine and want to put her in a story, then think of a plot situation that will make her utterly miserable. She can’t grow if she’s comfortable.

Maybe instead of chasing bad guys, she is forced to become the caretaker for her three young nephews after her sister dies. This PLOT is going to force her to be vulnerable, maybe have a softer side, and lighten up. Now, character (chain) and plot (gears) are linked.

Same if we go the opposite direction.

Maybe you have a great idea for a story. You want to take down a mob boss. Who can you cast that will be the most uncomfortable and thus grow the most? A former hit man who’s given up killing because he promised his wife before she died? An agoraphobic ex-cop who can’t leave her house? A sweet, naive soccer mom who believes that Bedazzling makes everything way more AWESOME?

Genre will dictate some of the casting, but note if we cast someone who would reach our story goal with relative ease, we risk having a one-dimensional talking head. We also diminish tension because remember, readers LOVE seemingly unbeatable odds. So, if we cast a highly decorated detective to take down our mob boss, make sure there is something about him (a wound) that puts the odds against him.

Wounds Don’t Have to Be Big to Be BIG 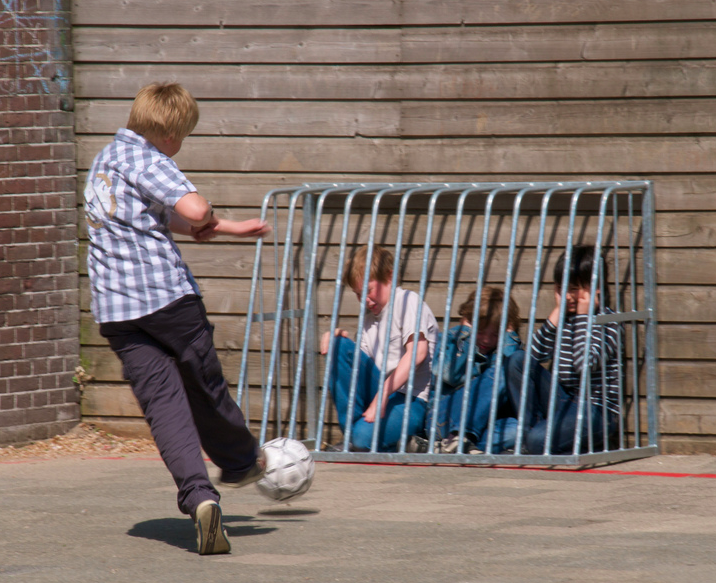 Often, new writers will default to wounds like rape or death or some big tragedy to create the wound. To be clear, I am not saying these aren’t viable wounds, but never underestimate the “smaller” and more relatable emotional injuries. The more a reader can empathize with one or more characters, the deeper that connection becomes.

Not everyone has lost their family to a sudden alien invasion— 😉 — but they can empathize with maybe never living up to expectations, being bullied, or not fitting in. LOTR rests on a small band of Hobbits who believe they are too little to make a BIG difference.

Perhaps the character is the invisible middle child trying to forge an identity, the eldest trying to hold the world together, or the baby who “got away with murder” and “was handed everything.” Never underestimate family dynamics as sources for realistic and powerful psychic wounds.

Wounds generate illusions. Because I grew up poor and lived hand-to-mouth all through college, I “believed” that money and financial security would make me happy. At 27, I made more money than any person in their 20s should make…and I was miserable. I was eaten alive with emptiness. I’d achieved all that should have filled that hole—the college degree, the premium job and premium pay. And yet?

I was the person stranded in a desert gulping sand I believed was water from an oasis. 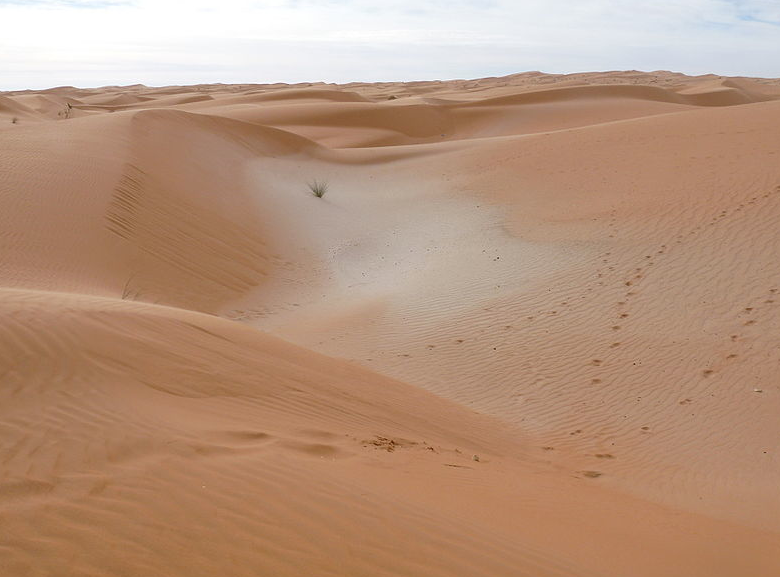 Character arc comes when a protagonist is placed in a problem strong enough to challenge the illusion and break it. The protagonist believes X=happiness/fulfillment. It is only through the story problem that the protagonist rises to become a hero, a person capable of realizing they were wrong and that they’d been coveting a shill at the expense of the gold.

Thus, when creating characters, keep the wound at the forefront of your mind.

What are your thoughts? Writing can be healing and therapeutic. Have you ever siphoned from your own hurt-reservoir to deepen your characters? Can you think of how even small hurts can become super-sized? What are some ways you’ve witnessed wounds driving people in wrong directions toward false happiness? Have you been there, done that and earned the t-shirt?

And to prove it and show my love, for the month of DECEMBER, everyone who leaves a comment I will put your name in a hat. If you comment and link back to my blog on your blog, you get your name in the hat twice. What do you win? The unvarnished truth from yours truly.

November’s winner of my 20 page critique is Nancy Segovia. THANK YOU for being such an awesome supporter of this blog and its guests. Please send your 5000 word Word document (double-spaced, Times New Roman Font 12 point) to kristen@wana intl dot com.

Check out the Upcoming Classes

Remember that ALL CLASSES come with a FREE RECORDING so you can listen over and over. So even if you can’t make it in person? No excuses! Fantastic as Christmas gifts *wink, wink, bid, nod*

All you need is an internet connection!

Branding Master’s Class Series with Kristen Lamb THREE social media classes, ONE low price. Only $99. It is literally getting one class for FREE!!!!

Craft Master’s Class Series with Kristen Lamb THREE craft classes, ONE low price. Only $89. One class is FREE!!!! Includes my new class The Art of Character.

When your Name Alone Can SELL—Branding for Authors January 13th, 2017