Well, it’s the last day of me, Cait Reynolds, playing “king of the hill” on Kristen’s blog. In honor of this fact, I’d like to begin today’s post by listing out the top five reasons Kristen could be denied re-entry into the United States. 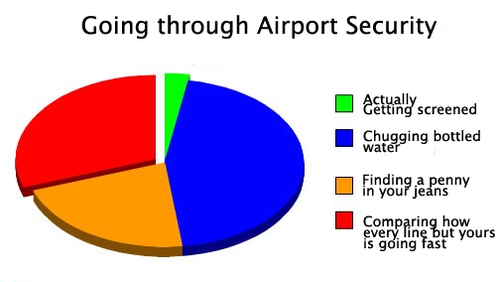 1. US Customs does not allow you to bring foreign livestock into the country. Kristen coming back counts as Lamb from New Zealand.

2. Kristen mentioned she was suffering from allergies due to pine pollen in New Zealand. This probably counts as smuggling in biological warfare agents.

3. Kristen did not get to see any hobbits. This will trigger a secondary scan of her passport because who doesn’t go to New Zealand and SEE HOBBITS??? Shady AF, if you ask me.

4. The TSA might interpret Kristen’s attempt at the haka as threatening government officials. Or deeply disturbing. Maybe both.

5. Finally, Kristen is coming back full of ideas. This is CLEARLY a threat to national security and must be neutralized immediately. In other words, by sending her back to (some really remote part of) New Zealand where her ideas can’t do much harm.

Maybe I’m just not ready to give this blog back to her. At the very least, you’ll still get to see me on Squatter’s Rights Wednesdays and in my classes. And who knows? Maybe Kristen will travel again (i.e. PLEASE SOMEONE, SOMEWHERE ELSE IN THE WORLD, INVITE KRISTEN TO VISIT!).

To round off my brief stint of world domination, er, substitute blogging, I give you Kim Alexander, here to talk to us about more stuff and things…but mostly stuff.

Last week we talked about the power of imaginary books – books that characters in novels talk about and read, but don’t really exist.

These imaginary books are a great way to comment on the action taking place in your actual plot, along with a good place to lay down a thick, velvety layer of exposition. So let’s spend some time thinking about imaginary holidays, another excellent place to evenly spread your exposition, taking care that it doesn’t drip down the sides. (I may be watching a lot of the Great British Bakeoff and I’m deeply concerned about a soggy bottom…aren’t we all?)

Because you’re a person who lives in this world/dimension, you probably know exactly what I’m talking about. Festivus, of course, is the invented holiday ‘celebrated’ by George Costanza’s family (and my family, and maybe yours) originally seen on Seinfeld. If I’m honest, though, we enjoy the Sharing of the Grievances all the year ‘round! (It’s December 23rd this year, get the pole ready.) 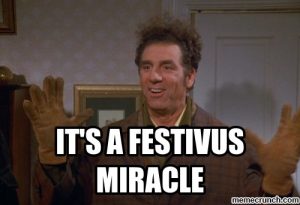 Invented holidays can come early in your drafts – that is to say, you can decide to throw a party without having all the details of the reason for the party mapped out. That said, eventually you’ll have to answer some questions about secular vs. religious events and what that means for the story at large.

At this point, I suppose it must be said that all holidays are imaginary, in that someone, somewhere thought them up and told their buddies they had a great idea for a day off.

Let’s look at Christmas, for instance. Leaving aside the question of whether or not it’s a state-sponsored consumerist event or a solemn religious occasion, we all know a lot of things associated with Christmas. How much are just things we talk and sing about because we always have? (In the interest of full disclosure, I am a secular Jew who has been collecting glass tree ornaments for many years and LIVES for the day we bring our tree home. Life is a rich tapestry!) 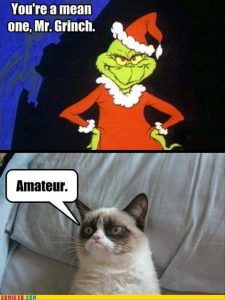 Santa is an elf, right (let’s ignore the whole bit about being a saint for the moment)? But he’s also normal person-sized. And he comes down the chimney. And flying reindeer. And the colors red and green. And turkey, even though we just had it a month prior. Why? Why do we drag trees into our houses? Why would anyone bring myrrh to a manger? What is myrrh? (A few minutes of googling should answer those questions, and also point you in the direction of the sorts of questions you’ll need to ask yourself.)

So if you take a step back and look at Christmas through the lens of writing a fantasy world, you can see it takes up a huge amount of space not only on the calendar (I saw my first ad this week, deep in the lurid heart of August) but in our emotional lives. We all have to make a decision on how to react to the holiday season: celebrate, ignore, mock, love, hate. Even if we consciously avoid it, it’s still making a mark on our behavior. Obviously, your fantasy holiday doesn’t have to have the enormous resonance of the triumvirate of terror that make up Thanksgiving-Christmas-New Year’s, but if you’re bothering to create it, make it have some impact. (I did not include Chanukah because it is awesome and includes fire.)

Caturnalia (hey, it could work!)

Okay, so you’re having a party. It’s in the draft and written on a post-it note. Now it’s time to take a step back and ask what sort of event it will be. This is your chance to shine a light on your created culture and bounce your characters against each other, which is where the fun happens. 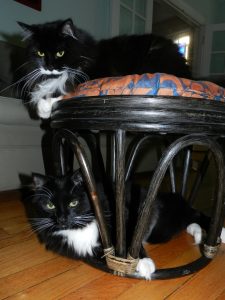 Leeloo and Onion would like to propose the holiday of “Caturnalia.” It involves tuna.

What gets your society together? Did they win a war or crown a ruler? Is it a religious event, or is your society a secular one? (Remember that a society is rarely a monoculture while you’re making these decisions.) What about your party? Is it a solemn occasion, or an excuse to drink and dance? Maybe they celebrate writing a song, or the color blue, or cats. (That sounds like a pretty good idea, actually.) You get to dress your characters up and send them to parties, and they either live it up or bitch about being forced to attend – or both.

In my book The Sand Prince, the human world celebrates something called The Quarter Moons Party (they have two moons.) It’s a combination of Independence Day and New Year’s Eve, and it celebrates a great victory and the continued safety of their home city of Mistra. Victory over whom? No one really remembers, and the songs they sing only vaguely allude to ‘locking The Door.’ Everyone wears white and there are special treats you only get once a year. Why? It’s always been that way.

The demons of Eriis who live on the other side of that Door remember it very differently, and when one of them visits the human world, he takes great offense at all the celebration. (He’ll probably appreciate the open bar, though.) Like everything else, an invented holiday is really just another way to explore your characters reactions to each other and to the world around them.

So whether you celebrate Durin’s Day, or First Contact Day, or save up your grievances for Festivus, or are writing up the grocery list for the Labor Day cookout, have a safe and happy one!

Kim Alexander lives in Washington DC where she writes epic fantasy and paranormal romance.  These days she divides her time between writing, rooftop gardening and waiting on her cats.

?Her earlier incarnation co-producing Sirius XM Book Radio gave her a look inside the heads of hundreds of best selling authors, and she’s ready to pass on what she learned. http://kimalexanderonline.com