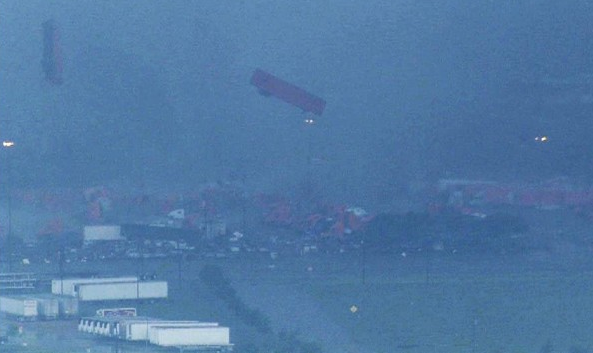 For more about the tornadoes, there are more slides and videos over at CBS news.

This past weekend I taught social media at the Texas Two-Step Conference. One of my classes was about Twitter. Many people see no use for tweeting, especially the mundane information of everyday life. It is my job to teach people why Twitter is so essential and help them understand the power Twitter gives us all access to.

I gained a profound lesson about Twitter yesterday during the massive tornado outbreak that ripped through North Texas. Twitter and twisters? Huh?

I’ll explain in a moment…

I am from Texas and have lived here virtually all of my life, and I have to say that spring here is one of the most nerve-wracking times of year. We’ve been through our share of horrific storms. Say 5-5-95 to anyone from the Fort Worth area and their eyes widen. They instantly get the reference.

I’ve been very fortunate to have never been in the heart of any of these outbreaks. Not that these storms weren’t still terrifying. Just because you aren’t in a tornado, doesn’t mean you aren’t getting 100 mile an hour squall lines that are uprooting trees all around you. Also, as a native, I have friends and family spread across the DFW Metroplex, so it is mind-numbing trying to contact everyone to make sure they take cover or, later, that they are still alive and accounted for.

Ah, but yesterday was different. I’d taught at a conference all weekend and was off my normal schedule. I couldn’t shake the fatigue, so my business partner, Ingrid, and I loaded The Spawn (my 2 year old) into the car to go to the gym. While at the gym we saw the weather report and it didn’t look good, so we high-tailed it out of there so we could run home before the storms hit. We still weren’t too concerned, because *shrugs* we are Texans and we are used to these violent spring storms.

So we get home, and Ingrid had one more errand she needed to run. She told me to check the weather but I got sidetracked with the toddler or something shiny, can’t recall. Anyway,  she was about to walk out the door when I said, “Wait! I totally forgot to check the weather. Let me look at that before you leave.” I go to the Weather Channel’s web site and what I see makes me stop dead cold.

Not a TORNADO WATCH or a TORNADO WARNING … no, a TORNADO ALERT, which means take cover or kiss your @$$ good-bye. Alerts mean a twister has been spotted and it is headed straight for you.

We scramble to get the storm supplies and take cover in the bathroom, and after a few minutes it seems we are in the clear. We creep out of the bathroom–shared with a hungry toddler, two cats and a dog–and look at the news. Is it past us?

The power goes out.

I can no longer tell what is going on. According to my friends on Twitter, it had just passed over us. Out the back window it seems we are clear, that the storm missed us. I venture a quick peek out the front door to see if I can get a visual on the storm. We are clearly NOT in danger, but I see this horrible wall cloud. 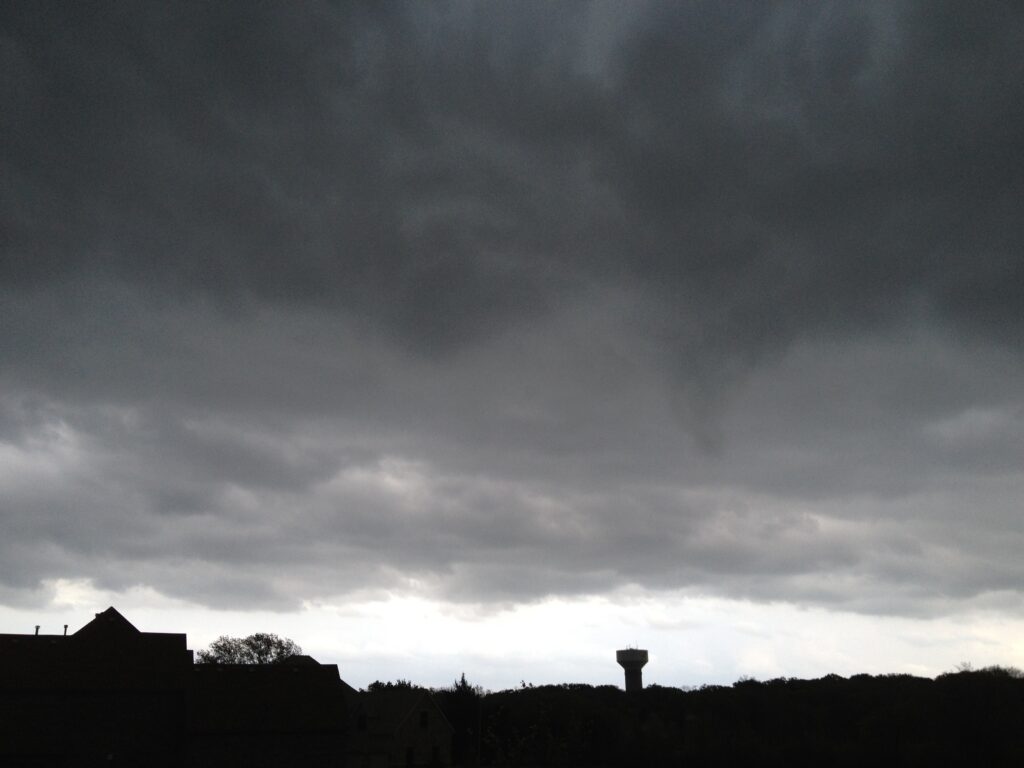 Anyone venture to point out the tornado?

This photo was actually taken earlier and from a different storm, but the wall cloud and that funnel dipping down is exactly what I saw. I would have been happy to provide an actual photo of THAT particular wall cloud, but I was too concerned with…um, not dying. Anyway, as you can see, there is a funnel dipping down, only, unlike the photo above, this lowering actually created a tornado that tore through Kennedale and then Arlington (right near the gym we’d just left) destroying or damaging 130 homes.

The video below is exactly what I saw form. This is footage of the actual Kennedale tornado.

What was so terrifying about yesterday was that all the tornadoes were all hitting almost at once. The meteorologists couldn’t keep up because the storms were spread across so many counties.Thus, while they were focusing on the Dallas tornado, those of us in or near the Arlington area couldn’t tell what was going on. Never seen anything like this.

What does all this have to do with social media? Huh? Social media. Well, it is Wednesday and normally social media is our topic. Twitter actually helped us take cover. The meteorologists couldn’t keep up, but countless tweeps across the Metroplex could.

There were moments that we didn’t have power and people were tweeting the warnings so I knew to get back in the bathroom. When we had power, I took up the self-appointed duty of Amateur Meteorologist and started tweeting every warning as it came, telling people to take cover.

Why was this important?

Well, the tornadoes hit during the workday and many people were not at home. A lot of workplaces don’t have televisions or weather radios. If the place of employment doesn’t have a lot of windows, people might not know there is a problem. BUT many people do have a phone that chirps when they get a tweet. One lady in Mesquite tweeted to me that she didn’t know that there was a tornado until I tweeted that one was on the ground headed straight for them. They had a chance to take cover.

The tweets also helped people warn friends and family or watch to make sure if they were in the clear. It was very rewarding to see how many people got on Twitter and worked together to share the news and make sure people they’d never even met could get to safety.

Social media is social, and storms have a way of making us feel powerless against the onslaught of Mother Nature. Yet, with Twitter, we could warn people we knew and even those we didn’t (unlike Facebook). By using hash tags like #DFW #tornado, we were instantly connected to people we’d never met, but who we could warn to get to safety (For those who don’t know, a # is a search filter, so anyone following #DFW, #tornado #warning would likely see all the tweets warning people to get to safety).

We could look for tweeps we knew were in the area and comfort one another. Twitter helped tremendously when the power went out, because we could still rely on our phones’ Twitter application and gain up-to-the-second information from our friends who were being vigilant enough to keep tweeting real-time information.

If we rely on the TV, we can’t be in the bathroom, but my family could take cover and stay safe while we watched Twitter on my phone for the best real-time information. We could also tweet back to those warning us what we were hearing or seeing and if we were okay.

So thank you to all the tweeps out there who took time to look out for us. Some of you have never met me, and you might not ever know me, but know that we are so grateful that you took time to care for strangers. No one was killed, thank God, but there are countless people who’ve lost everything. I am off to bring some supplies to the @RedCrossDFW. Follow them and see how you might be able to serve those hurting right now. But thank you, thank you thank you for serving us yesterday. Who knows if your tweets are why no one died? Maybe you saved a life.

So were you helped by Twitter in the DFW storms? Did you tweet to help others? Have you ever used Twitter in a similar fashion? What are your thoughts? Stories? Impressions?

I will announce the winners next week. A little behind after the storms.