Standing Out in an a World of Invisible—Does Advertising and Marketing Still Work?

Spice Up Your Fiction–Simple Ways to Create Page-Turning Conflict 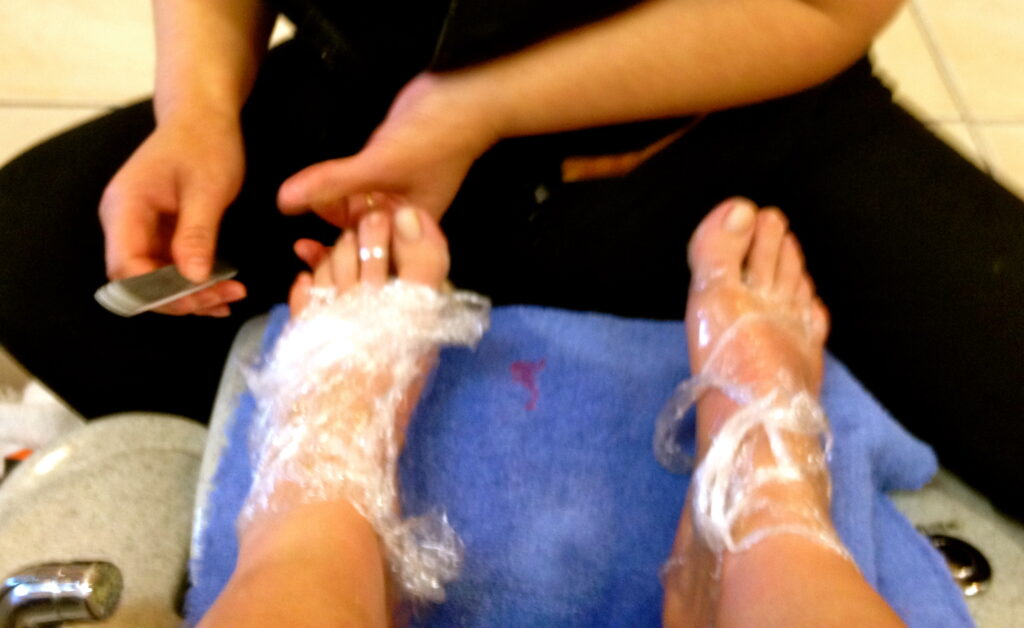 So this past weekend I finally carved out the time to go and get a pedicure, which I used to do once every week and a half, pre-marriage-baby-being-a-serious-writer. Serious as in I write every day, not serious as in I am above Star Wars references and quoting Monty Python.

What you guys likely don’t know is that I have like the World’s Skinniest Feet. I wear a 9.5 AAA, which means nothing comes in my size…ever. It also means that I am condemned to living in flip-flops all year, clogs for the handful of really cold days in Texas. This means my feet are almost a perpetual train wreck of callous, which used to not be too bad before I got married and started valuing sleep over having a flower painted on my big toe nail.

Thus, this past weekend I drew the line and decided it was time to get a pedicure, and I really felt sorry for…Tina, because she had her work cut out for her (I am an excellent tipper).

So Tina hands me this menu so I can pick out what “flavor” I want. Now I know there are words that are easy to confuse and lose in translation. I once asked a Swiss woman if she was cooking dog for dinner and then later announced at dinner that I was sexually aroused.

Ich bin heiss apparently means you’re feeling randy and it’s Ich habe heiss if you mean that you are feeling hot, not HOT. “I am hot,” not “I am HOT.”

…I’ll shut about that because you guys get the point.

Anyway on the pedicure “menu” I can choose such flavors as Chocolate Mint, Pina Colada, or Strawberry Margarita….like “dipping my toes in a margarita.” 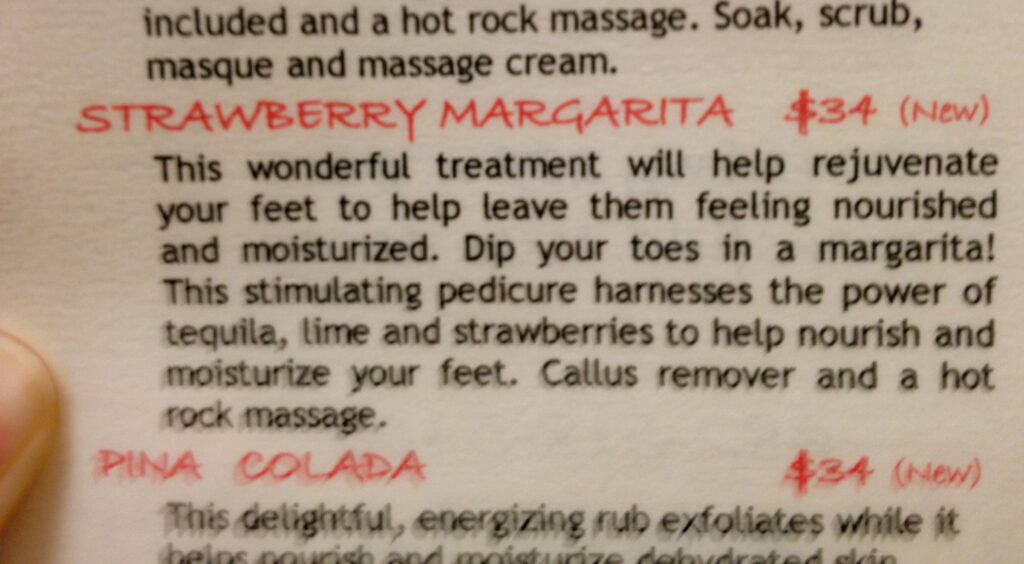 WTH? I would honestly hope my husband loves me enough to cut me off before I stuck my feet in my cocktail.

But this made me think of an interesting point. Why do so many female products come in “flavors?” I can see how a foreigner could get confused when you see Strawberries and Cream Skintimate or chocolate body lotions or cucumber melon body scrub or cotton candy bubble bath.

Men don’t do this. Seriously…they don’t.

We don’t see body sprays that smell like barbecue or deodorants that smells like beer or a Philly cheese-steak. No bacon moisturizer or Cola Slurpee athlete’s foot powder.

Ew….might have gone too far with that last one.

Of course, after I noticed this, I had to mentally work out various hypotheses to explain this differences between the sexes.

And my third grade teacher said I didn’t use time wisely. *rolls eyes*

If the way to a man’s heart is through his stomach, are we just lathering ourselves with man-bait? Sort of like spraying on deer urine to attract a 12-point buck.

This seemed like the best explanation, but upon further rigors of the Scientific Method the hypothesis fell apart. I know! Seemed solid to me, too. Then, I realized that most of the “flavors” are foods women like. Chocolate aside, I will never get my husband to eat a cucumber unless I grind it into his burger, and the melon better be garnish on an ice cream cone. If we ever see a man order any drink that comes with an umbrella, he is likely batting for the other side and apparently using the wrong deer urine because coconut attracts chicks.

Girls buy products that smell like all the stuff we’d love to eat if we weren’t trying to fit into something other than pregnancy pants.

This theory held up a bit better, but the cucumber is still the weird outlier. Although, granted, if one happens to be a Hollywood starlet I guess that anything with more calories than air might be seen as “forbidden.” And again this doesn’t account for the lack of a Cheese Enchilada body lotion or Movie Popcorn with Extra Butter shaving cream.

Proctor & Gamble has not yet realized the “deer urine aspect” of their products.

I tell ya, make a perfume that smells exactly like brisket? You’d have a line. Just sayin’.

Girls don’t mind smelling like Peaches and Cream, but we draw the line at Fried Chicken.

Hmmm. Plausible. But, if they’re single gals who want a man, they might want to up their game with some Cheese Coney hand cream. It’s a thought!

We are not above smelling like bacon, but we might attract more than men…like feral cats, raccoons, neighborhood dogs or potheads with the munchies.

A Glaring Hole in the Marketplace

Yet, the fact remains that there remains a wide-open gap in the marketplace. Clearly P&G could get some competition if an up-and-coming entrepreneur wished to exploit said weakness. While P&G focuses on making women smell like Berries & Cream, a start-up company could develop some body sprays and bath oils that might work better as man-bait. I found an image with some great suggestions. My favorites are Rattlesnake and Panther, though Freedom was a close third. 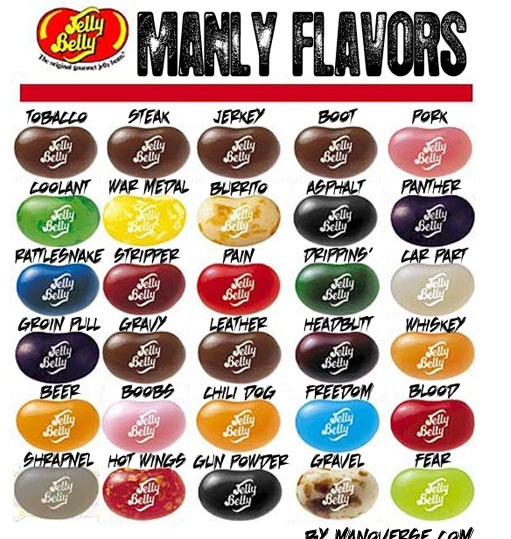 I now see why it took me to age 35 to find a husband (weirdness and possible insanity aside). We women have been doing this wrong. We didn’t need Raspberry body wash, we needed “Gun,” “Duct Tape” or “Shrapnel.”

So what are your thoughts? Any suggestions for manly fragrances? Any other hypotheses about the reason for this clear difference in the sexes and their toiletries? Or maybe my reasoning was flawed and you’d love to spend your precious time applying the Scientific Method to a random theory by a crazy blogger. If you are a writer, yes it counts as work.