The Engine of Fiction—Meet the Antagonist 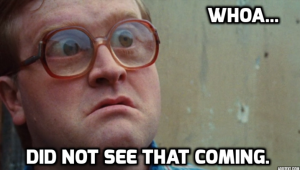 Last time we talked about paradigms, and how paradigms are what make the difference between a flat one-dimensional character background and a fully dimensional creation. The paradigm is the meaning of the background, the character’s interpretation of their own experiences.

We all know there is an inherent X factor to humans. Theologians, scientists, geneticists, sociologists, psychiatrists and self-help gurus have all been trying to unravel that X factor probably since humans had enough free time to get existential. The nature-nurture argument is still alive and well with no clear answers.

The paradigm represents this X factor.

One person gets mugged and becomes agoraphobic. Another becomes a black belt. And yet another brushes it off and is just more careful and maybe carries pepper spray. Humans are all vastly different, and this provides the wide pallet of color from which the skilled writer can then create.

In the last post, we referred to the paradigm as a set of lenses. Experience, birth order, genetics, etc. all serve to grind the lenses the character wears. As also mentioned in the last post, the protagonist wears these lenses but only we—Author God—know these lenses are flawed and in need of replacing.

Now when we simply look at the protagonist—because it is HER story—we know the core plot problem we create must be directly related to shattering HER particular paradigm. If the plot doesn’t do this? It’s going to fizzle, because there simply won’t be any conflict. The paradigm reveals the pain point, the critical node and perfect place for us to strike.

If the character is family-centered, we go after the family. Job-centered? Go for the job. Relationship-centered? A break-up is on the horizon.

We need to smash what the protagonist believes is important and reveal what really is important. Let’s look at a couple of examples to see how this works. I’m going to use different genres so you guys get a better feel for what I am talking about.

The Lord of the Rings Trilogy 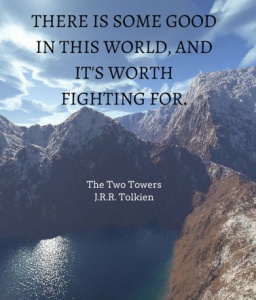 Frodo is achievement-centered. He believes The Shire is holding him back. It is too prosaic, too mundane. No, he is called to adventure and wants to see the world and experience dragons and orcs and look for treasure. He has a romanticized notion that what is outside The Shire is far more important than The Shire.

This means we need to give him a plot problem that 1) gets him out of The Shire (give him what he believes he wants) 2) exposes that all this adventure he has been dreaming about is seriously NOT as wonderful as he’d imagined 3) place The Shire and all he took for granted in genuine danger of being lost for good.

In the beginning of our tale, Frodo cannot wait to leave The Shire. In the middle (Book Two) all he wants to do is return to The Shire and by the end (Book Three) he is willing to die to save the very place he took for granted. His lenses of All Outside the Shire is Super Awesome have been shattered and replaced. 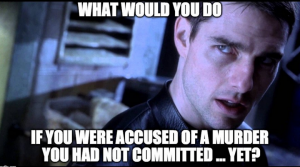 John Anderton not only heads Pre-Crime, he is a bonafide acolyte of a system that uses the Pre-Cogs to see a crime before it ever happens. With Pre-Crime the murder rate in D.C. has dropped to almost zero, and with less-than-subtle encouragement from his mentor? John firmly believes that Pre-Crime is the answer to human sin, that if it had only been around a few years earlier, he would never have lost his son.

He honestly believes there really is no such thing as free will, that humans don’t have the ability to choose. That what the Pre-Cogs see is set. He is all about the job, because his job is changing the world and making it “safe.”

John is job-centered. His entire identity is wrapped up in Pre-Crime.

So, knowing this, the screenwriters (tasked with adapting the Philip K. Dick version for film) understood precisely where to strike. They knew to hit John Anderton right in the job, right in his belief in the infallibility of Pre-Crime. How did they do this?

They red-balled him (a red-ball is a warning of premeditated murder).

John believes that the Pre-Cogs are infallible. But how is he supposed to murder a man he has never even met? By the end of our tale, the man who believed enough in Pre-Crime to lead the charge to take it national, is now the one who destroys it. By the end he can finally see the wreckage of his life.

Before, when he had the job-centered lenses, he was driven by the career, fueled by drugs and haunted by his guilt. In all of this he’d pushed away his wife, destroyed his marriage and haloed countless potentially innocent people who very well might have made a different decision in the seconds before…just as he had.

With new lenses, he can finally SEE his flawed world and set it right. Tear down Pre-Crime, free those jailed under it, let go and mourn his son, and reunite with his estranged wife. 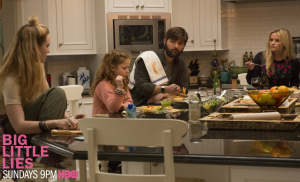 I touched on Liane Moriatry’s Big, Little Lies last time. The story actually blends the threads of three major characters but for the sake of brevity? We will continue to pick on Madeline. As I mentioned last time, Madeline has a family-centered paradigm. Her entire worth and how she sees herself and her world is caught up in her ability to be a mother.

More accurately, how much her daughters need her.

In the beginning of the story we get that Madeline is losing her grip. Her youngest daughter Chloe is finally in grade school and is becoming more and more independent. To make matters worse, Madeline’s ex-husband, Nathan, who abandoned her and the older daughter Abigail years before is back with a new (and far younger) wife, Bonnie. He also has a new daughter Skye, who’s enrolled in the same school (and same class) as Chloe.

Madeline already feels her identity grip slipping in the beginning, so what did Moriarty do? She stomped on Madeline’s fingers and dropped her off the ledge. If her entire being rests on her children needing her, what will she do when Abigail bonds with her “replacement” Bonnie? When her daughter decides to leave the mother who stood by her for the man who abandoned them both?

The story problem forces Madeline to learn the old adage, If you love something, let it go and trust that her daughter will return. Trust is not Madeline’s strong suit for obvious reasons (namely abandonment). But Madeline is going to have to learn to forgive and to trust in order to be reunited with her older daughter.

She needs to lose the family-centered glasses and realize she is a person in her own right and that her identity cannot rest on her children’s need because that has led to control and not love.

I am hoping you are seeing the depth that the paradigm offers as well as how it is almost a witching stick for finding the perfect story for your character. By adding the paradigm, plot almost magically reveals itself. Next time we are going to take the idea of paradigms even further to show how this is going to generate page-turning conflict throughout and keep your readers up so late they will curse your name but secretly love you for all that missed sleep.

What are your thoughts? Can you use this idea of paradigms to see your favorite books and movies in a whole new light?

Pitch Perfect—How to Write a Query Letter and Synopsis that SELLS! $45 April 13th, 2017