What's the Magic Number? How Often Should Writers Blog?

Beating the "Sugar" Addiction–Tightening the Writing 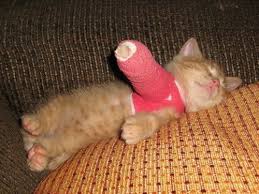 Happy Friday!!! TGIF!!! I have a speacial treat for you guys today. My friend, the HILARIOUS Clay Morgan, writer, professor and speaker from Pittsburgh, PA is here as a special guest. Some of Clay’s works include, Don’t Forget the Toilet Paper: A Memoir, Visits with Dead People: Family Memories, and Michael Myers vs. Facebook.

Thank you, Clay for sharing your wit and wisdom…

A few years ago I busted my hand while packing our vehicle for departure. Not good. We were about leave for a 25 hour drive to Florida, and I was scheduled to be behind the wheel for approximately 25 of those hours.
Extra not good.

I knew the hand was in trouble by the way the left side collapsed. The thing looked like an ampersand by the time we rolled into the Sunshine State. The doctor we rented a beach house from took a cursory look at my paw and made this sound: “ughblarg…” There may have been a snarf in there too but these memories are pretty sketchy since my brain was fairly rattled by the Vicodin-endorphin-orange juice cocktail I consumed for breakfast that day.

The staff at the emergency room down there could have just kidney punched me and taken my wallet for all the effort the expended to tell me my hand was broken. I left there with some x-ray images, a Cracker Jack prize, and a medical bill.

Throughout the rest of vacation and another week back home the bones healed but problems were setting in. I couldn’t find any bullets to bite, so I just went to my doctor and showed him what happened. Did I mention
the injury happened to my left and I’m a southpaw? Off to the orthopedist I went!

My left hand shudders at the memory of what took place there. Having broken bones set is never a picnic, not even a picnic that gets rained out while ants crawl all over your food. But let me tell you about how they fix smashed bones after two weeks of healing incorrectly.

I was laid on a table and given a nerve block in my hand. Two men stayed in the room. One of these guys was the doctor. His job was to sit on a rolling stool, take my hand, and re-break the not tender enough bones in order to properly reset everything. The other guy’s job was to lean across me with hands or forearms in case my body reflexively tried to attack and murder the good doctor.

You might think this procedure involves some sort of implement. Nope. Just the bare hands of someone who’s taken the Hippocratic Oath. He squeezed and pressed and snapped the stubborn paw. That’s snap, crackle, and pop if you’re keeping score at home.

I reacted sort of how William Wallace looks at the end of Braveheart when the executioners are fidgeting with his entrails. I sounded like him too, no words just grunts and empty gasps. It was as close as I ever came to seeing the types of things cartoons see when you hit them over the head with a frying pan.

When he finished I told the assistant how glad I was that the ordeal was over. He said, “Well, he still has come back and actually set the bones now.”

I’ve never written that story until now my WANA friends, but I have cause for dragging you through tha trauma. See, despite being a nonfiction writer these days, I also wrote a novel once. The unpublished book is a supernatural thriller called Dash. Think Field of Dreams but written by M. Night Shyamalan.

My book sucked mostly, but I got it done. All first novels are terrible, right? (Curse you David Baldacci and anyone else who hit it big on the first try.) Most of us just need to get it out. Get it down. That first book is a mind dump, as much therapy as plot development.

Mark stared down the space pirate, a creature more hideous than his dad who never came to any of my
games or even supported my decision to become a professional blogger! Oh, oops…

Maybe that’s just me. Maybe you’ve been there. That’s one of the main reasons we have to let our work sit
and get dusty for a bit after completion. We care too much about our fabulous WIP at first (mine took two  years to write). A little distance hardens our nhearts enough for us to come back with a chainsaw later.

I still love my characters in Dash and did okay with dialogue, but I learned much about editing through hacking that puppy to bits. Three times. I realized it might just be saleable if I chopped another 25,000 words and eliminated a couple characters. I quit instead and haven’t looked at it in 4 years.

Then I went to a writer’s conference recently where my current work generated some interest. One night, an acquisition’s editor from a small press asked if I had anything else. I briefly described my sucky novel Dash. She told me to send it over.

I’m thinking that reworking that novel will be about as pleasant as the time Doctor Pain brutalized me. Like my hand, Dash had too much time to form in the wrong way with built in damage, bad settings, and screwed up structure. But I’ll probably try for another painful attempt sometime since we writers are clearly masochists.

My style has changed. I’m a completely different person. I may need to be heavily medicated again, but should be distanced enough from that manuscript by now to bust it apart with all the dispassion of a hand-breaking orthopedist.

If you’re in the middle of a project and sense a fatal flaw you might want to face it sooner than later. I denied the extent of my problem and ended up with a painful and costly solution. But life was so much better once my hand was fixed, and I need that sucker to keep on writing, even when it hurts.

Do you have a MS that needs some painful deconstruction/reconstruction? How do you approach this painful chore? What are your thoughts? Suggestions? War stories?