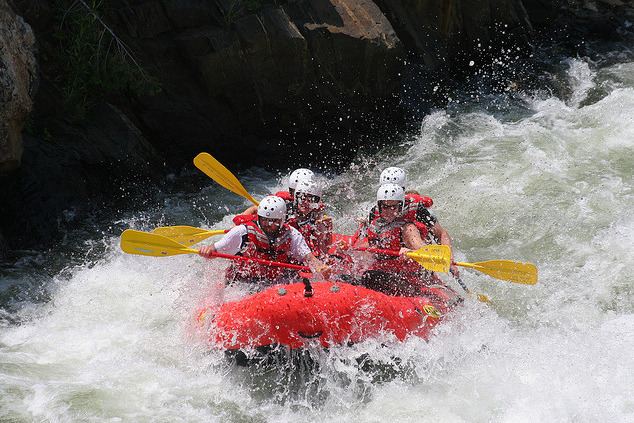 Today, (due to some comments in last week’s posts) we’re going to tackle a highly confusing subject for many writers—In medias res. In medias res quite literally means in the middle of things. This is a literary tactic that has been used since the days of Odysseus. It’s a tactic that forces the writer forward, to begin the story near the heart of the problem.

The Trouble with In Medias Res

Ah, but this is where we writers can get in trouble. I see writers beginning their novels with high-action gun battles, blowing up buildings, a heart-wrenching, gut-twisting scene in a hospital or at a funeral, all in an effort to “hook the reader” by “starting in the middle of the action.” Then when they get dinged/rejected by an agent or editor, they’re confused.

But I started right in the action! What is more “in the action” than a high-speed chase through Rio as a bomb ticks down to the final seconds?

Bear with me a few moments, and I will explain why this is melodrama and not in medias res.

For many centuries, there was a literary tendency to begin “in the early years” leading up to the story problem. Authors would wax on rhapsotic about the setting and spend 10,000 words or more “setting up” the story. The reader was privy to “why such and such character” became a whatever. There was a lot of heavy character development and explaining the why of things.

This, of course was fine, because in the 18th century, no writer was competing with television, movies, Facebook, or Angry Birds.

Thus, if a book was a thousand pages long, it just meant it must have been extra-awesome. Also, authors, back in the day, were often paid by the word, thus there was a lot of incentive to add extra fluff and detail, layer on the subplots and pad the manuscript more than a Freshman term paper. Writing lean hit the author in the piggy bank, so most authors lived by the motto:

No adverb left behind.

Then Hemingway came on the scene and…well, let’s get back to my point.

In medias res was not employed by many early novelists. They started the book when the protagonist was in the womb (being facetious here) and their stories often took on epic proportions.

Modern writers can’t do this. Yes there are exceptions to every rule, so save the comments/e-mails. Just trust me when I say that modern readers have been spoiled by Hollywood and iPhones. They are used to instant gratification, and most modern readers will not give us writers 20,000 words to get the the point.

There Needs to Be Normal World

We have to know who the players are, thus what’s at stake.

Case in point. I just edited some sample pages from a new writer. The story began in a whitewater raft, with a family careening toward the rocks. Well, it took me a half a page to figure out they were in a raft, then an entire page to realize there was more than the protagonist, and two pages to realize it was a family, but then the raft flipped and dumped everyone out, the water hurling them toward the rocks.

I hadn’t spent any time with the characters, so I didn’t care. They had no faces or names so, to me, they were “red shirts.” This wasn’t a story, it was what Les Edgerton calls a bad situation.

Bad situations are not authentic drama.

There Needs to Be a Hint of the Story Problem

In this instance, the writer had a great story idea, but she began right in the river with the family hurdling toward doom. Okay, but we’re too far in. Had the writer started a bit earlier, the story would have been fine. Perhaps we could have had an argument between Mom and Dad as they unloaded the kids and gear from the family mini-van.

Dad says the rapids are only a Category 1 and Mom argues there were flash floods in an area upstream that could affect the water level and intensity of the rapids. She wants to go hiking instead. She doesn’t trust this river to be just a lazy day on the water with the kids, but Dad insists she is just a neurotic worrier.

See how we aren’t yet in the river, but we are tense. We KNOW Mom is right and they shouldn’t go anywhere NEAR that river.

Now, we know that family isn’t going to listen to Mom, because then that would be a really short (and sucky) story. But it doesn’t stop us from hoping they will go hiking instead of rafting.

The writer had a good idea for a story, but she started too far into the story.

We don’t need the family waking up, eating breakfast, packing, loading the mini-van, driving to the State Park. That’s too far back. But, if we begin with them in the river, we are too far in. No one will care. We need to begin in medias res. What is the story problem?

The rapids are much higher than the family realizes, and they’re all in jeopardy. Thus, we need to begin as close to that fateful decision as possible. It could be at the gate, when the ranger warns them of the floods, but Dad really wants to use his new $1500 worth of equipment and thinks they’ll be fine.

Just get as close to that decision as possible, but still give us 1) time to get attached 2) an opportunity to see the story problem 3) a chance for the characters to walk away and end the story.

I hope this helps you understand in medias res a bit better. I know it confused the Charles Dickens out of me for a long time. What are your thoughts? Opinions? How do you figure out your in medias res? Any tricks? Tips?