The Attitude of the Farmer–Learning to Do My Part

What Warren Buffett Can Teach Us about Social Media

What Star Trek Can Teach Us About Great Writing 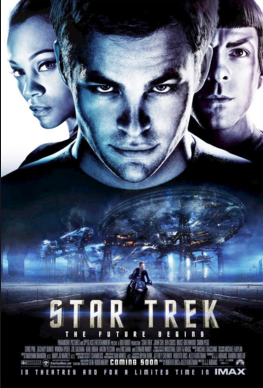 Last night I watched the new Star Trek movie directed by J.J. Abrams for the second time. As a writer, stories are my business, so I study them in all forms. Film is a favorite in that it takes far less time and allows me to study the written form in a visual way. I don’t watch movies like most people, much to my husband’s chagrin (he would put tape over my mouth if he could get away with it).

This recent version of Star Trek did very well at the box office and resonated with audiences in a way that other high-budget fast-paced sci-fi movies had failed. Why? I believe Star Trek was a wild success because Abrams adhered to some very fundamental storytelling basics too often forgotten in Hollywood and even in writing.

Yes, movies and novels have more in common than you might think. Today’s blog especially applies to sci-fi and fantasy, but I believe all genres can benefit from these lessons I plucked from the screen last night. Today I will address some of my favorite points, because this movie is such a fantastic tool for understanding great storytelling that I couldn’t possibly address all the lessons in one sitting.

Audiences LOVE flawed characters. James T. Kirk was deliciously flawed at the beginning. He was on a road to self-destruction believing he could never stand in the shadow of his father’s greatness. He demonstrated how character strengths of a great leader, when not harnessed properly, are tools of great mischief and mayhem.

Did the plot really serve to change Kirk? Not really. His attributes were very similar, just refocused in a productive way. The inciting incident really just put Kirk on a path that would make better use of his buccaneer ways.

Want an illustration from the fiction world? I believe that Twilight is a great example. Bella was deeply flawed and thus readers could easily slip into her shoes. They, too, could look at Edward and long to know what it would be like to be one of the beautiful people.

I think that is why a lot of movies flop. Who can relate to Angelina Jolie? In Tomb Raider she was fun to watch, but we have absolutely no way of connecting with Lara Croft. She is beautiful, insanely rich and lives a life of adventure. The movies would have done better had the writers/directors done something to make Lara Croft real.

The first movie did well simply because fans of the video game. Yet, audiences couldn’t connect to this super perfect (and not really likable) character, so the second movie bombed big time. And I am not alone in this assessment. Read Save the Cat by the late screenwriting genius Blake Snyder, which is a great book for all writers to read anyway.

Writers. Can we cast über perfect characters? Sure. But we do so at a risk. Perfect characters easily become one-dimensional and boring. As in movies, we need to connect with a reader, and most of us didn’t sit at that table in high school.

Star Trek did an unsurpassed job of showing, not telling. Yes, they can info-dump in movies. I gutted through Deadline with the late Brittany Murphy and there were convenient camcorder tapes along the way to info dump back story.

There were all kinds of scenes dedicated for the sole purpose of characters discussing a third-party. No, no, no, no, no! Bad writer! Had the screenwriter been in my workshop, he would have gotten zinged. Virtually everything in Star Trek happened real time.

The director didn’t dedicate entire scenes to Spock and Uhura explaining how Kirk was a reckless pain in the tush. Abrams employed scenes that showed Kirk crashing through their lives like a bull in a china shop. There was ONE flashback and it was information critical to understanding the plot.

One element of showing and not telling is to make the most of your story. Employ setting, symbol and action economy. If a scene can do more than one thing…let it. In the beginning (prologue) Kirk’s mother is pregnant (with him). Bad guys appear, and Dad is left on board as acting captain of the ship.

He must sacrifice to save them all. It is no accident that the director did two things. First, all the battle noises fade away and symphony music rises. Then, the scenes cut from Mom giving birth to Dad giving his life. Birth and death, hope and sacrifice are suddenly in perfect harmony. That was done for a reason. In your novel, do all things on purpose.

Look at your scenes. Can they do more than one task? For some ideas, read my blog Setting—More than Just a Backdrop. Setting can be used for more reasons than to give readers a weather report. Lehane proves my point in Shutter Island (discussed in blog), which is a tremendous example of narrative parsimony.

In the beginning we see Kirk as this crazy guy power drinking and zooming around on a crotch rocket. Yet, the director knew he could have a problem. He needed Kirk to be a maverick risk-taker…but he also needed to prove to the audience that his protagonist wasn’t a foolhardy idiot.

No one wants to follow a raging moron with a death wish into battle. The director needed to show us someone who cared deeply about others and who was willing to risk everything for his men.

How did he do this?

There is an early scene where they have to do a space jump (think HALO jump). Kirk and Sulu go with a Red Shirt—which means Red Shirt dude is going to die for those who are not Trekkies. Red Shirt guys always bite it.

The interesting thing is that the Red Shirt guy is hooping and hollering all the way down like some idiot out of a Mountain Dew commercial. Kirk pulls his chute and begs the guy to open his. Red Shirt is too busy being a thrill-seeking idiot and ends up vaporized. Now we the audience can see Kirk takes huge risks, but we also understand that he cares about others and is not stupid.

This is the single most important lesson for those writing sci-fi, fantasy, paranormal or horror. Tell us a story about people first. Relying on gadgets and gimmicks is not storytelling. There are all kinds of space movies that had far better special effects than the original Star Wars, yet Star Wars endures and will endure to future generations.

Why? Because it told a story about people first. I believe this Star Trek will do the same.

I know I risk making some die-hard fans angry at me, but I never could get through the newest Star Wars trilogy. Why? Because there was so much CGI (computer generated imagery) that I felt like I was trapped at Chuck E. Cheeses and having a bad LSD trip. I felt the computer images were far too distracting.

Star Trek used CGI, but not at the expense of the real focus . . .

The stories about the people.

I edit a lot of writers who want to write YA, fantasy, paranormal, etc. and too often they allow world-building to take over. The reader is so bogged down in gimmick that she cannot see the characters or the story. Frequently there isn’t a story.

World-building is something a writer must employ to assist or accentuate the core conflict. Our goal as writers must be to get a reader to relate and connect. People connect with people, not worlds. Conflict drives stories, not gizmos. Thus, all the magic and myth must be ancillary to the root story. If you have done a good job of plotting, that root story will be very simple and timeless and could take place in Kansas or on Planet Doom.

For those of you who haven’t watched the new Star Trek, I highly recommend it (duh :D) even if you aren’t a fan of sci-fi.

Are there some movies you guys would recommend to help us grow in our craft? Put them in the comments and help us out.